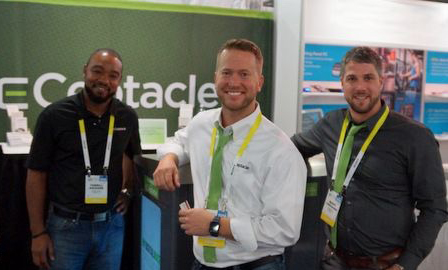 One Carmel entrepreneur thinks trashcans can do more than just store garbage.

His company, eCeptacle, has developed a product called the PowerBin that can compact trash, send e-mails or texts when the cans are full, provide Wi-Fi to nearby Internet users and even display messages on LED screens. 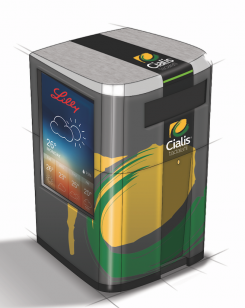 A rendering of the high-tech can.

“We call it the world’s smartest trash can,” said Grant Jenkins, who founded the company in 2014.

Jenkins, 38, came up with the idea while working in the banking industry and walking through downtown Indianapolis. He thought more could be done to improve the city’s trash services, and he began to recruit partners. Engineers at Rose Hulman Ventures helped him design the five-foot-tall model that uses energy from putting trash into the can to actually power the trash compaction.

The LED screens are a big part of the PowerBin’s appeal. Clients such as universities, cities, corporate campuses or sports stadiums can utilize the screens to display important messages such as upcoming events or public safety announcements. The screens would display advertising as a form of revenue for eCeptacle, and then the bins would be leased to clients at a reduced cost. If advertising revenue were sufficient, cans could essentially be given away to clients. Leasing a PowerBin could cost approximately $2,000 a year.

The bins have a public safety application and can detect the sound of gunshots and begin filming at once. It’s possible someone could pull up an app called DigitalMace on their smartphone and use the PowerBins to send a panic alert, similar to the “blue light” poles found on college campuses.

The PowerBin was honored as a top ten digital product, alongside Panasonic and Corning, at the Consumer Electronics Show 2016.

“We were really excited about that,” Jenkins said. “We’ve been busier than we’ve ever been because of our success at that event.”

Currently, the first paying customer is Lilly & Co., but Jenkins said several other clients are interesting. Conversations have been had with Downtown Inc., City of Evansville, Indiana Pacers and Fishers Parks and Recreation Dept.

“Coming out of CES, we’ve had recent conversations with universities such as Oklahoma University to the City of Beverly Hills,” he said. “We receive calls from Dubai, Ecuador and Canada even inquiring about our product.”

Jenkins said the goal is to deploy the first batch of cans in early summer and have approximately 2,000 cans out by the end of 2017.

Jenkins said he believes the product can positively affect the community by, “enhancing social, environmental and economic sustainability.”

He said the compaction and notification options are beneficial to the environment by reducing the need to have 30-ton trucks that cost $100 an hour to operate to blindly to check on capacity levels of cans.