You are at:Home»Current in Fishers»Junk King opens in Fishers 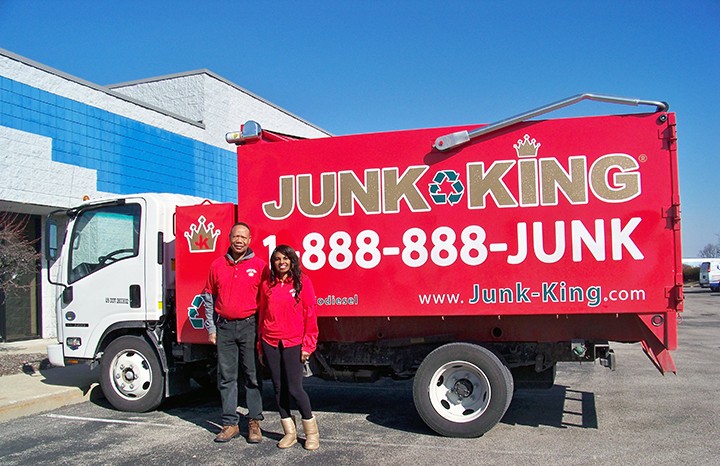 Julius and Jacqueline McQueen have opened the first Indiana Junk King franchise on North by Northeast Boulevard in Fishers. (Photo by Sam Elliott)

Julius and Jacqueline McQueen opened their Junk King location earlier this year at 9840 North by Northeast Blvd. and offer junk removal services for anything and everything throughout the Indianapolis area.

“Nothing’s too small and nothing’s too big,” Jacqueline said. “Everything and anything goes. We get requests for baby grand pianos and hot tubs and we can even take cars or trailers if we get that request… Anything — boxes, TVs, refrigerators — not only from just houses, but also corporations.”

Junk King will haul away yard waste, too, and hazardous materials are the only things they won’t take, Julius said.

The McQueens’ big red Junk King truck has 18 cubic feet of storage — large enough to haul roughly six pickup truck loads of junk. Their goal is to add a second truck by the end of the year and expand the fleet to as many as five trucks in the next three to four years.

And once Junk King leave a job with a truckload of junk, it isn’t all automatically taken to a landfill. The company recycles or refurbishes what it can to donate to local charities and service organizations like the Salvation Army, Goodwill and the Julian Center.

“That is one of the distinguishing points between us and some of our competitors,” Julius said. “Sixty percent of what we collect we donate and it’s to some very good causes.”

“I was a caseworker, so I’m always in the mood to help people and to help give things away,” Jacqueline added.