You are at:Home»Current in Fishers»Chandler receives Sagamore of the Wabash Award 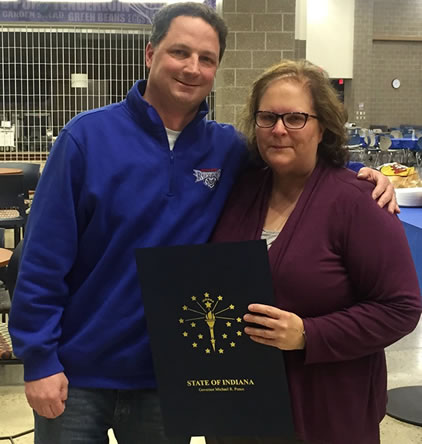 The recognition came as a total surprise to Chandler, who received the award during the school’s We the People team dinner and celebration.

“It was an honor,” she said. “I had no idea whatsoever I was getting it.”

A former student of Chandler’s, State Rep. Todd Huston, presented her with the award on behalf of Gov. Mike Pence.

The Sagamore of the Wabash Award was established by Gov. Ralph Gates in the late 1940s in response to him receiving a Kentucky Colonel Award from the governor of Kentucky.

“The term Sagamore was used by the American Indian tribes of the northeastern United States to describe a lesser chief or great man among the tribe to who the true chief would look for wisdom and advice,” said HSE school board president Karen Harmer, who had done some research on the award prior to the Feb. 24 board meeting. “I thought that was the coolest part of this.”

The award is the highest honor the governor of Indiana can bestow to those who have contributed distinguished services in the state.