As a fourth grader, Hayden Bauschka was given a choice by his father on his birthday in October. He could go to school or take the day off and go golfing. Of course, he chose golf, and that began a love affair with the game. 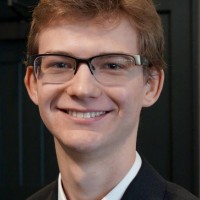 That love affair paid off handsomely for the 2015 Carmel High School graduate and Purdue freshman as he was recently awarded one of 11 Chick Evans Scholarships through the Western Golf Association. The scholarship is for tuition and housing. Bauschka, 19, will live at the Evans Scholars house at Purdue for the following three years. All 11 recipients, including one female, will attend Indiana University or Purdue, where there are houses for Evans Scholars.

“It takes a huge burden off my shoulders,” said Bauschka, who is majoring construction engineering management. “It will be nice not to go into debt to pay for (college). It’s something that has been a goal of mine.”

Evans Scholars are chosen based on strong caddie record, excellent academics, demonstrated financial need and outstanding character. They went through an interview process at Carmel’s Crooked Stick Golf Club Feb. 3. Bauschka is rare as most Evans Scholarships are awarded to high school seniors, but college freshmen are eligible.

Bauschka applied for the scholarship as a Carmel senior but knew it was a long shot since he only had 25 caddying rounds in his one year of caddying. Bauschka boosted that total to 103 before this application. Prairie View Golf Club served as his sponsoring club.

Bauschka played golf for Carmel’s team as a sophomore but didn’t make it as a junior.

“It turned out to be a blessing in disguise, as he allowed me to work to caddy and work more,” Bauschka said.

Evans Scholars have to maintain a 2.5 GPA average, but Bauschka said a 3.0 is recommended. They must perform duties around the house and community service. There is no food service in the house, so many work in food service at sororities, fraternities or dormitories in exchange for meals.

Purdue senior Jackson Schuette, a 2012 CHS graduate, was awarded an Evans Scholarship before his freshman year at Purdue.

“It’s been a life-changing experience,” said Schuette, who majors in natural resources and environmental science. “I wouldn’t be able to attend Purdue and do what I want to do with my life if it wasn’t for the Evans Scholarship.”