You are at:Home»Current in Carmel»Carmel Community»Carmel High School boys swim to state title 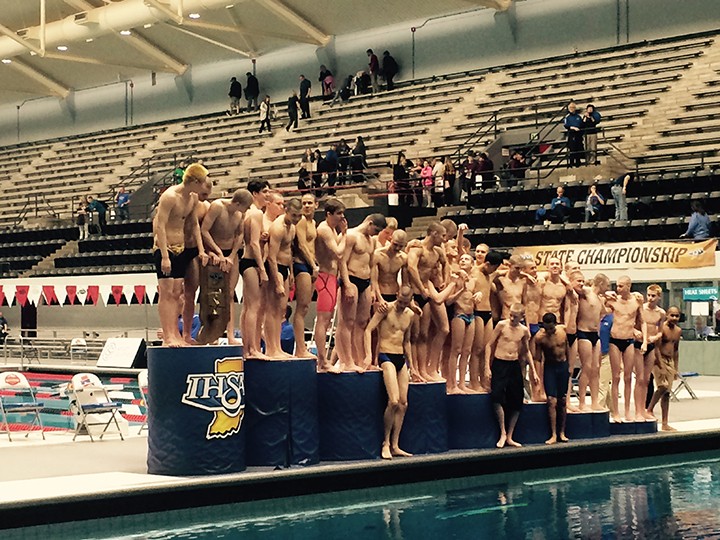 This year was a bit different.

“No one gave us a chance. We were ninth in the preseason poll and tied for fifth in the last rankings,” Carmel coach Chris Plumb said. “These guys came in and brought it both days, unbelievable performances. This is the least expected one we’ve had. But I always believe in what we can do with the great coaching staff and the guys we have. We needed a lot of guys to step up and they did that.”

The Greyhounds repeated as champs by slipping past top-ranked Zionsville by one point (216-215) in the state finals Feb. 27 at the Indiana University Natatorium at IUPUI.

Carmel trailed the Eagles by one point heading into the 400-yard freestyle relay. Carmel finished second, two spots ahead of the Eagles.

It was the 16th state title for Carmel, which now has six more than anyone else. It was fifth for Plumb as coach. The Eagles, who have never won a state title, also finished second to Carmel in 2015, 253.5 points to 176.

“Even though our last relay got fourth, we moved up two places and dropped three seconds where we were (in prelims),”  said Scott Kubly, who is in his 27th year as Zionsville swimming coach. “The effort was there. We just came up one point short. That’s the bottom line.”

Zionsville sophomore Jack Franzman was a double winner, taking first place in the 50 freestyle and 100 free.

“He’s definitely a competitor, and he doesn’t like to lose,” Kubly said. “When he came in as the No. 1 seed, I thought he had a pretty good chance of winning those events.”

“Those two wins were huge swings,” Plumb said. “Charles was a hammer. He brought in everything he did.”

Li and Vaughan were both on the second-place relay team that clinched the title. Li called the final race a heart-stopper.

“It was just an incredible way to top off my high school career,” said Li, who will swim for Brown University next year.

Vaughan said everyone stepped up to contribute.

“We expected (the title), but I don’t know if anybody else did,” Vaughan said. “That was the fun part.”