You are at:Home»Current in Carmel»Carmel Community»Brian Brosius remembered for love of laughter, commitment to family 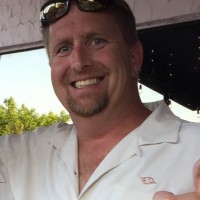 March had always been a significant month for the Brosius family. Within its 31 days, Brian and Jennifer celebrated their anniversary, both of their children looked forward to birthdays, and they marked the years since they moved to Indianapolis.

But this year, a month normally full of happiness began with tragedy when Brian, 44, collapsed March 3 at Taste of Carmel, a fundraiser for Orchard Park Elementary that Jennifer helped organize.

“I fell to the ground and was panicking, and they took me out to the police car,” Jennifer said.

“They put him into the stretcher and took him into an ambulance and then they just kind of sat there. They didn’t go to the hospital right away. I think they kind of knew he wasn’t coming back.”

Brian had been diagnosed with heartburn several months ago, Jennifer said, and he thought it was just acting up more than normal when he didn’t feel well the day of the event.

“He didn’t think anything of it,” she said.

He was about to get up to go rest in his car when he collapsed into his mother-in-law’s lap. Paramedics at Taste of Carmel instantly came to his aid, but he died after being transported to the hospital, Jennifer by his side. Doctors told her he had 100 percent blockages in his arteries.

Brian and Jennifer met on a blind date in Tucson, Ariz., 18 years ago and were “inseparable ever since,” Jennifer said. The couple married in 2002 and moved to Florida three years later. After an especially difficult year of dealing with hurricanes, they decided the Sunshine State wasn’t the best fit for them.

“We closed our eyes, looked at a map and pointed,” Jennifer said. “We did some research and figured (Indianapolis) would be a wonderful place to live.”

The couple moved to the area in March 2006. Brian was working in the finance department at Camping World in Greenwood at the time of his death. He had previously served in the U.S. Air Force and was a Gulf War veteran. He enjoyed playing golf, riding his motorcycle and making people laugh through pranks and jokes.

Now, Jennifer and her two kids, Wyatt, 8, and Piper, 4, are suddenly trying to navigate life without the man who would do anything for them.

“He bent over backwards just to make me happy,” Jennifer said. “He worked so hard, long hours many years, just to provide for me and the kids. He sacrificed so much to make sure that we were taken care of.”

Jennifer said she’s been overwhelmed by the outpouring of support from community members. They’ve provided a bright spot in a dark time by sharing memories of Brian, bringing meals to the family and starting a Go Fund Me Page at www.gofundme.com/ktsnz77w to help pay for the funeral and other expenses.

“It’s just been so surreal, and I can’t even explain it, but it’s been wonderful,” Jennifer said. “It’s really helped me, the little messages throughout the day, and people stopping by the house. It’s really helped just being able to talk about it and be with my friends and laugh and have fun memories of him.”

The family will hold a funeral mass for Brian at 9 a.m. March 9 at Our Lady of Mt. Carmel Catholic Church, 14598 Oakridge Road in Carmel. In lieu of flowers, the family is asking for memorial contributions to be directed to the Wyatt and Piper Brosius 529 college fund. Checks may be made out to College Choice 529 and mailed to Flanner and Buchanan Funeral Center, 325 E. Carmel Drive, 46032.