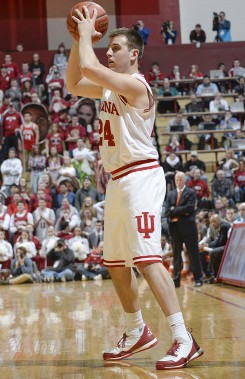 Jackson Tharp has risen from a manager on the Indiana University basketball team to player. (Photo by IU Athletics)

Although Jackson Tharp was twice an All-Hoosier Crossroads Conference player at Zionsville Community High School, he had no illusions that his role as Indiana University basketball manager would one day turn into a spot on the team.

However, after three-and-half seasons of hard work, it did. IU Coach Tom Crean placed the 6-4 senior on the roster Jan. 15.

“Growing up in Indiana, to just put the uniform on itself is unbelievable,” Tharp said. “Then to get into a few games, I can’t even describe it.”

Entering the final regular season game, Tharp had played four minutes in three games. But those are moments he can talk about forever.

“I can say I played Indiana basketball,” he said. “It’s something I’m going to keep with me the rest of my life.”

Tharp admitted he does get a bit anxious wondering if he will go in when the clock is winding down and the Hoosiers are up big.

“Really I’m just excited that we are winning by that much that I might go in,” he said.

Tharp is the second manager to join the team since Crean became coach in 2008. He became a manager as a freshman and said he knew it was a possibility it could happen, but he certainly wasn’t counting on it.

“I never came into it looking at that. It’s just a bonus,” Tharp said. “I’ve been involved in practice since I was a freshman, but only as a manager. I only got a chance to show what I could do a few times during a practice. My job was always to make these guys better.”

Crean said he had three reasons for promoting Tharp.

“Number one, he’s an outstanding person and has been since the day he got here,” Crean said on his radio show. “He earned his way up the ladder. Number two, he can wear a lot of different hats. He made us better all the time, whether it was in a drill or with his passing, by keeping a chart or in the film room. Third, I thought he could help our team. I haven’t been wrong yet. He’s hasn’t been able to help us in a game yet, but he has in practice.”

Tharp is still getting used to his newfound prominence. Tharp’s mother, Christy, works at Zionsville Middle School. She noticed a student staring at her computer screen.

“He finally asked if that was Jackson Tharp,” Tharp said. “He told her I had just signed his shoes at a game and was excited about it. I told her she needed to buy him a new pair of shoes.”