You are at:Home»Current in Carmel»Carmel Community»Midwest Academy grad’s story sheds light on grandmother’s life during WWII 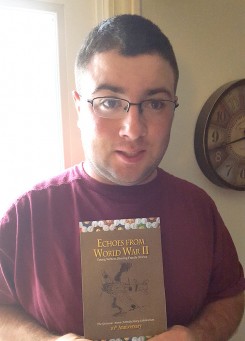 Sean Millard’s stories about his grandmother are getting exposure again.

The Grannie Annie, a nonprofit based in St. Louis, invites students in U.S. grades four through eight and homeschooled and international students of comparable ages to interview an older relative.

Millard’s mother, Karie Millard, said her son has always been close to his grandmother, Christine Englemann Millard, 81, who has lived in Indianapolis since 1968.

“I was very excited it was going to be re-published,” Millard said. “I was also excited the first time they were published so my family could read about Oma (German name for grandmother).”

Millard, a 2012 Midwest Academy graduate who lives in Indianapolis, works as an office assistant at Orchard Software in Carmel.

“I learned more about her childhood and the story behind the Christmas bulbs we hang on our tree every year,” Millard said. “I also learned how she had to beg for food just to eat, and that they couldn’t go to the store like I do now. I learned how life was very different when Oma was a younger girl. They had to live a different way of life just to get to the next day.”

As a small child, his grandmother carried those Christmas bulbs from the Sudetenland (part of the Czech Republic) in 1945 when her family and others of German descent were forced to leave their homes and return to Germany.

“They could only take what they could carry, and they were herded on to trains and shipped back to Germany,” Karie said.

“Echoes from World War II” is available on Amazon.com.