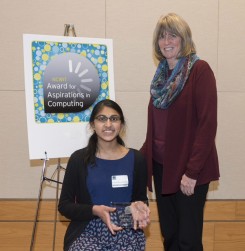 She received her award at the OneAmerica building and received a check for $250, engraved plaques and a gift bag.

“My interest in computer science started with a fascination in robotics after I read the 2010 cover article of the National Geographic Magazine, Merging Man and Machine. In middle school, I pursued every opportunity to build bionics and robots,” Balasubramanian said. “Today, I am involved in computer science because I understand the importance of the field is more than just programming. To me, computer science is exciting because it is a result of testing the limits of computation.”

Balasubramanian and the other winners received the award because of their aspirations in computer science and technology and plans for post-secondary education and leadership ability. Balasubramanian also was also runner-up for the NCWIT National Award.

amazing knowledge that is being explored in the most advanced research institutes this moment,” Balasubramanian said. “I want to do research in the interdisciplinary area of computer science and math. Another area that I have already begun to pursue, and will continue in the future, is inspiring girls to fearlessly try computer science, because of how underrepresented we are in these high-tech areas.”

Balasubramanian is the founder and president of the Carmel Girls Can Code club at CHS, and she also plays the flute. She said she is also involved in an assortment of math, science, technology and service clubs at CHS.

Carmel resident Michelle Zhu, who attends Park Tudor, also received the award but did not respond as of press time.