You are at:Home»Current in Carmel»Carmel Business Local»Toppers to support Feeding America 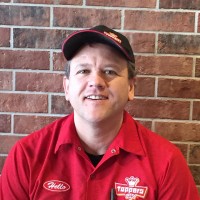 Brent Koontz is proud of the Feeding America program that Toppers Pizza embraces.

Since 2011, Toppers has raised more than $250,000 for Feeding America. Koontz, the general manager of the Carmel Toppers Pizza, 12545 N. Meridian St., a corporate-owned store, said the store is embarking on its biggest philanthropic promotion yet.

“Our growth is because of the people around here,” Koontz said. “So it’s important for us to give back to the community.”

Koontz, a 1988 Carmel High School graduate who lives in Westfield, said for both Carmel and Indianapolis Toppers stores, the money will go directly to Gleaners Food Bank in Indianapolis, a partner of Feeding America.

“In the past, we had deals on some of side items (to raise money),” Koontz said. “But this is amazing deal to get a one-topping pizza for such a low price. We expect quite the turnout.”

“Hunger in America is a problem that affects every community,” Gittrich said. “We are in the pizza business, but we are also in the people business. We help feed hungry people in our communities. Our partnership with Feeding America stemmed from our desire to partner with an organization that shared in the mission to help hunger in America. Toppers is a nationwide franchise and Feeding America has a nationwide network of member food banks; as Toppers continues to be one of the fastest-growing better pizza chains in the U.S., our growth will continue to provide more meals right back into the communities we open in.”

With stores in 12 states, Gittrich said the goal for the five-hour promotion is raise at least 550,000 meals.