You are at:Home»Current in Westfield»Lancaster family holds fundraiser 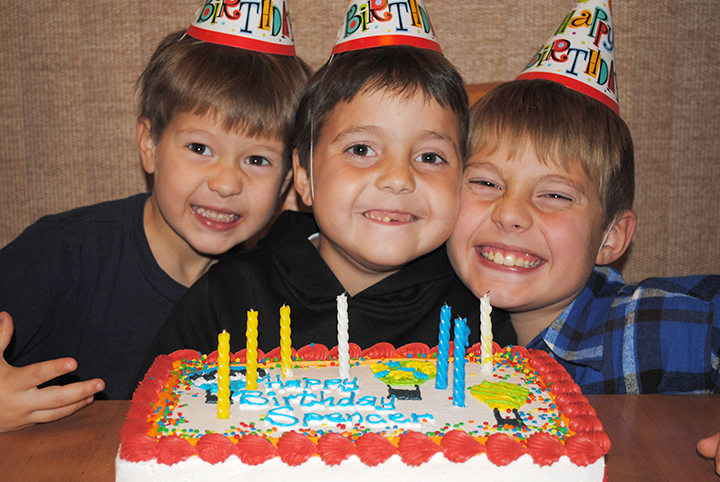 Spencer Lancaster, who lost his life in 2011 to cancer, celebrates his birthday with brothers Hunter, left, and Noah, right. (Submitted photo)

The Lancaster family of Westfield has experienced cancer too close to home. From 4:30 to 7:30 p.m. March 5, the Lancasters will hold a chili dinner and raffle fundraiser at Christ United Methodist Church, 318 N. Union St., with the Relay for Life team, The Holy Rollers.

The Lancasters became heavily involved with Relay after Spencer was diagnosed and have remained involved after he lost his battle to cancer in 2011.

“The event is open to the entire community. Our church team puts it on,” Shawn Lancaster, father, said. “Half of the proceeds from the event will go towards my son’s, Noah, team. Noah is 15, he started a team to do something. Each year we have joined the church team, but this year he started his own team.”

So far, Noah has a group of kids participating on his team. The group will assist at the fundraiser with serving and clean up.

“In the raffle there will be everything from gift cards to craft items to larger items, like a couple of sink faucets,” Shawn said. “There will be other donations as well, like gift baskets, things of that sort.”

Participation in the raffle is not required for the chili dinner.

Members of the church will make the chili homemade, and other members will bake desserts to sell. Shawn said he has a goal to raise as much as possible.

“The year, we had Spencer involved with serving chili. We raised $5,000,” Shawn said.

The Relay for Life theme this year is “Lucky 13,” and Noah named his team “Ocean’s 13.” Yet there’s another reason behind the number.

“Spencer would have been 13 this year,” Shawn said. “It’s interesting that it’s the 13th year of relay and Spencer would be 13.”

To donate to the Holy Rollers’s Relay team, visit bit.ly/1mFTQEo.