You are at:Home»Current in Zionsville»Giehll murders town’s first since 1997 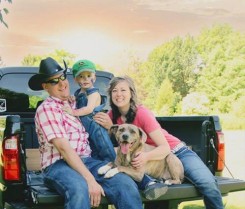 Although it’s been nearly 20 years since it happened, Zionsville Police Chief Robert Knox clearly remembers investigating the gruesome murder of Janice Willey in her home near the corner of Ford Road and Bloor Lane in 1997.

Now another tragic day will be etched in his mind.

Katherine Hamilton Giehll and her son, Raymond Peter Giehll IV, 4, were gunned down in their Zionsville home on Feb. 17. It’s the first murder in Zionsville since the Willey homicide nearly two decades ago.

“This one here was the worst day in my 37 years in law enforcement,” Knox said. “It’s always senseless, but when you have two people murdered like that, and one of them being a four-year-old child, this is the worst.”

The Boone County Sheriff’s Office led the double homicide investigation, but the Zionsville Police Dept. provided assistance throughout the day and is continuing to offer support. Whitestown and Lebanon also helped, and investigators from across the region comprising the Boone County Homicide Task Force were called in as well.

“When the call comes in, everybody goes,” Knox said. “We’re so fortunate in Boone County that we have this kind of relationship working together.”

Knox remembers a cooperative effort also helping to solve the Willey murder in 1997. Like the Giehll homicides, the suspect in the Willey case also took his own life. The victim’s ex-husband is still serving time in prison for his involvement, Knox said.

With the instances of violent crime in Zionsville being few and far between, the town has recently received accolades for public safety. Knox knows the statistics won’t look as good next year, but he also knows that the town is not immune to tragedy.

“It’s nice to be recognized as the safest city in Indiana and one of the top ones in the nation,  but bad things happen everywhere,” Knox said. “Yesterday the face of evil came into our community.”