You are at:Home»Current in Zionsville»Zionsville students take virtual field trips through Google Expeditions 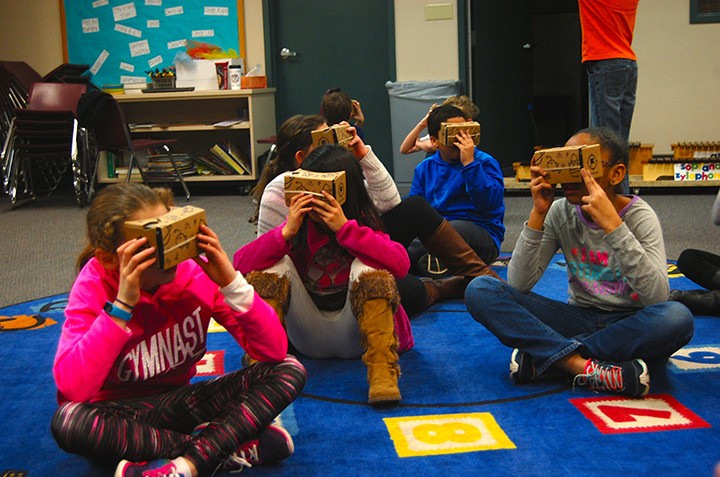 A pilot program for virtual reality field trips is being tested in several Zionsville elementary schools.

Google Expeditions allows teachers to take their classes to national parks across the country and even underwater. Each student wears a pair of glasses – specifically Google Cardboard – that creates a stereoscope or view master. A cell phone is inserted into the front of the glasses. The teacher utilizes a tablet to select a location to visit and the lesson begins.

“It was basically like looking at a 360-degree picture,” said Stonegate fourth grader Oscar Moosbrugger, who experienced the program with other students from his school. “You could look around but not see yourself.”

He described looking around the area by tilting his head up and down and side to side. He and his classmates were able to see specific things pointed out by his teacher using the tablet cursor linked to the cell phone screens being viewed.

“If you looked down, you couldn’t see yourself, and it felt like you were going to fall,” said Moosbrugger, who visited the Grand Canyon.

The images are courtesy of a free Google Cardboard app that can be loaded onto any cell phone. Cardboard glasses can be purchased online, or Google offers instructions on how to build a viewer out of everyday items.

“It’s super self explanatory and pretty easy to do,” Google spokesperson Patrick Lenihan said. “The goal is that a school could get this and have the students right away walking at the bottom of the ocean.

“Right now we’re still figuring out exactly what the package looks like,” Lenihan said. These pilot programs are helping to determine pricing and program details. “We’re still trying to figure out how to do things.”

All students in the class are able to participate simultaneously. According to Google, more than 100 expeditions are available. The free program is being piloted in five countries around the world.