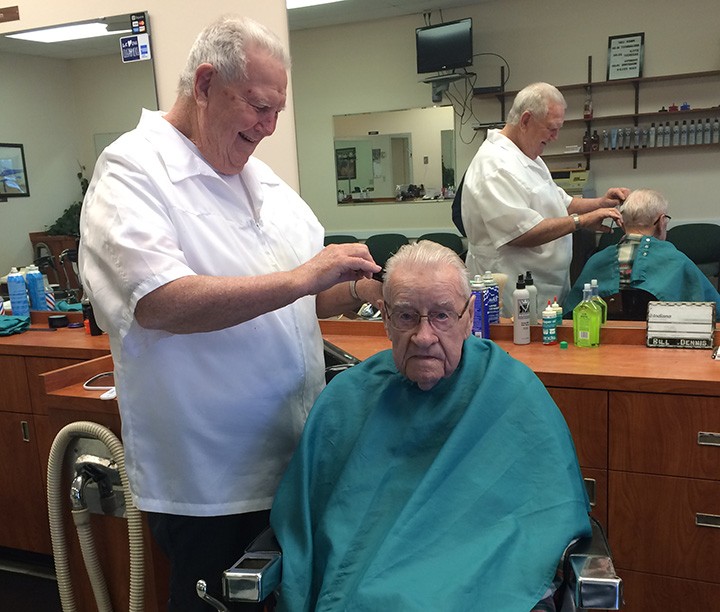 He has lived in Carmel for more than 50 years and is a creature of habit. He and his daughter, Cathy, 59, have lunch each day at MCL in Carmel. He goes to Butler Barber Shop in Carmel every three weeks on Monday to get his hair cut by Bill Dennis, 77. A Westfield resident, Dennis used to have his shop in the Home Place area and Clark would come in there.

Clark was drafted in 1942 and entered the Air Force, which was a part of U.S. Army at the time.  It became a separate branch in 1947, and Clark got out in 1949. He was stationed in Fairbanks, Alaska, for two years during World War II, working as a mechanic.

“That was rough enough. That was pretty rough country,” said Clark, who was also stationed in Arizona and California.

Clark said there was thick ice on the shower walls.

“You had to watch if you were naked you could get cut on the walls,” he said.

Clark, who reached corporal, developed a plating show for the Air Force before he was discharged in 1949.

During his time in the Air Force, at midnight, he and other service members would race the vehicles in Alsaka that pulled the planes.

Clark began his career at Allison Transmission in Speedway in 1940 and returned there after his service, working 25 years. He then managed an estate in Carmel for 25 years. His family lived on the estate as well. Then he worked a print shop for six more years, retiring at age 80.

Dorothy, his wife of 72 years, died in 2013 at age 93. Clark lives with Cathy, a nurse at an assisted living facility in Fishers, who helps take care of him. He has another daughter, Sara, who lives in Indianapolis.

Clark, who was born in Boggstown in Shelby County, raced some midget cars and worked as a race mechanic after getting out of the service. Clark once had a barn full of antique cars as a hobby, but gave that up.