You are at:Home»Current in Westfield»Westfield boy named Athlete of the Year 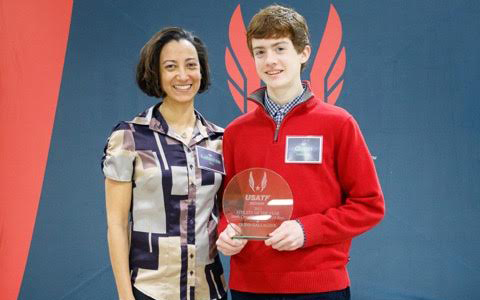 Latashia Key, president of Indiana’s USATF, pauses with Quinn Gallagher as he receives his Athlete of the Year award. (Submitted photo)

Quinn Gallagher began running in fifth grade after he tried football a few years previous and the sport didn’t work out.

Now, he was named as the Athlete of the Year through USA Track and Field for the U13 and U14 boys group.

He won at the regionals in Indiana for USATF and during the nationals in Albuquerque, N.M., Quinn placed as All-American, running the 4K in approximately 13 miunutes and 20 seconds.

A committee through USATF looked at the runners over the season and determined who received the Athlete of the Year based on performance and other criteria.

“It’s a great award for him in terms of where he’s come from and where he wants to go,” Quinn’s father, Tom, said. “He went from improving all season and all summer and had a great high school season during his first year as a freshman. To cap the year with a cross country award was a great motivator and great indicator of all the hard work he’s put in over the years.”

Tom said Quinn is planning on reaching the state meet in his high school cross country team next year and also plans on running in college.

“He started out trying to play football in third grade, and that didn’t work out well, so in fifth grade he started cross country at Mount Carmel just for fun and he kept getting better from there,” Tom said. “After his eighth grade season and during the summer before his freshman year, he made a huge jump and became pretty good.”

Last month, Quinn went to an award ceremony with USATF downtown to receive his Athlete of the Year award.

For more on USATF, visit www.usatf.org.