You are at:Home»Current in Geist»Lawrence PD officer saves boy from frozen pond 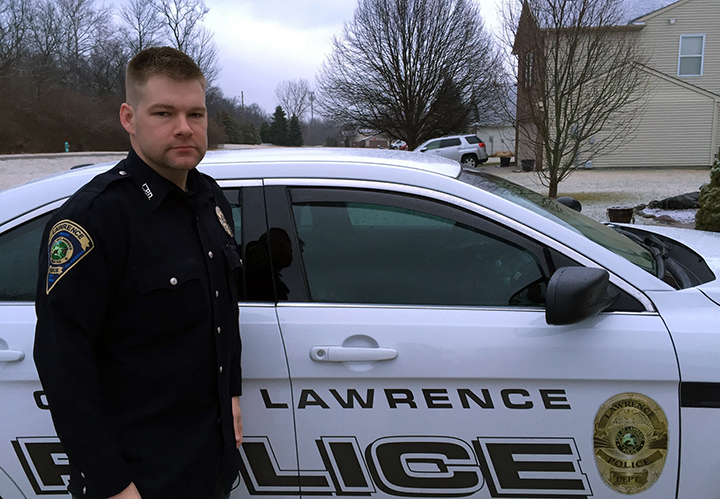 The heroic actions of a Lawrence Police Dept. officer helped save the life of a 14-year-old boy who had fallen into a frozen pond.

Lawrence police and firefighters were dispatched to the 9400 block of Bob Drive at approximately 4 p.m. Jan. 30. The boy had fallen through the ice of a retention pond just north of Bob Drive and south of Harrison Community Park.

Without hesitation upon arrival, officer VanTreese ran toward the child, who was mostly submerged about 10-15 feet from the shore.

“I could see the kid with his head above water and hands up on top of the ice, and really didn’t even think twice about it,” VanTreese said. “The duty belt came off without even thinking about it and I was putting my stuff down and jumping in the water.”

The pond’s ice was thick enough near the shore to sustain VanTreese’s weight until he got closer to the boy. The day’s warmer temperatures had begun melting parts of the ice, but VanTreese said the boy probably thought he was OK because the ice didn’t initially give out under his weight.

Officer VanTreese was able to get to the boy and pull him to safety as medical personnel were arriving on the scene to take him to Riley Hospital for treatment.

“It could have been 20 degrees below zero, it could have been 100 degrees outside — that wasn’t going through my mind,” he said. “I saw this child with his head above water with arms on top of ice who obviously couldn’t get out. He was obviously in danger, in fear of losing his life. I had no idea what the water temperature was, I don’t even recall it being cold — I just remember the cold didn’t truly set in until I got about halfway home to change uniforms. I realized ‘OK my lower body is starting to get chilly now.’

Freeman said she plans to introduce a resolution at an upcoming city council meeting to commend VanTreese for his selfless act in a life-threatening situation.