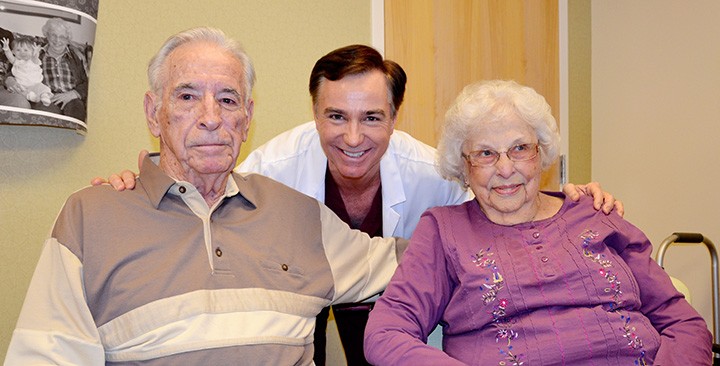 Fishers residents Albert “Bud” and Beth Rees celebrated their 70th wedding anniversary Feb. 1 with a gathering of friends and caregivers in the Cardiac Rehab gym at IU Health Saxony.

It’s a milestone the couple said they wouldn’t have reached without the care of IU Health Saxony cardiologist Dr. Edward Harlamert and his team behind hospital’s Cardiac Rehab program.

Bud, 91, has had several challenges with his heart, resulting in a pair of stents put in place. He completed Phase II of IU Health Saxony’s Cardiac Rehab and has stayed on as part of Phase III of the program. Bud visits the hospital’s gym and works out three times per week on the treadmill and bicycle and sometimes lifts weights. Beth, 90 as of Feb. 8, will join him with she’s feeling up to it.

Both are patients of Dr. Harlamert and the couple still lives independently in the Fishers home Beth grew up in one mile away from the hospital. The couple was married Feb. 1, 1946 — two weeks after Bud returned to the United States from serving in Normandy and the South Pacific in World War II.