You are at:Home»Current in Fishers»Gary Harris adjusting nicely to NBA life 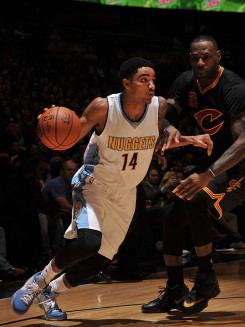 “He has definitely produced, and I think he’s one of the most improved second-year players in the NBA,” Denver Nuggets coach Michael Malone said.

Harris, averaging 11 points per game this season, said knowing he doesn’t have to prove himself in a short appearance has helped his development.

“I’m getting in a routine and getting a certain amount of minutes per game,” he said. “I’m able to go out there and play and not worry about making mistakes. Just being out there able to compete and help my team is the biggest difference this season.”

Harris, 21, opted for the NBA Draft after two seasons at Michigan State and was selected 19th in the first round in 2014. The 2012 Indiana Mr. Basketball averaged 13 minutes and 3.4 points in 55 games as a Denver rookie.

“Confidence is the key, I don’t care what sport you are talking about. I think Gary’s confidence is at an all-time high for him because he’s getting an opportunity,” Malone said. “He’s starting and playing 30 minutes a night. He knows we believe in him. I think last season was tough for him because he wasn’t sure when he was going to play or if he was going to play. Now he has a role and he’s done a good job embracing that role.“

Harris played his second NBA game in front of hometown fans when the Nuggets played their lone regular season appearance in Indiana on Jan. 30. Harris was able to spend time with his family during an off day in Indianapolis.

“I gathered up a decent amount of tickets,” said Harris, who scored 18 points in a loss to the Pacers.

Share. Twitter Facebook Pinterest LinkedIn Tumblr Email
Previous ArticleLove letters: Zionsville artist’s calligraphy adds a personal touch to any occasion
Next Article Got the ‘Blues?’: ‘Blues for an Alabama Sky’ opening at Theater at the Fort