You are at:Home»Current in Fishers»Fishers recognized for Hometown Help for Heroes program 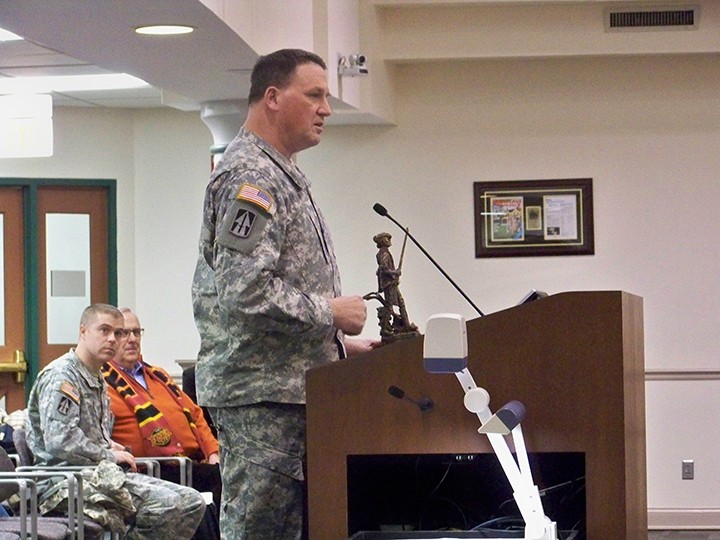 The Adjutant General for the Indiana National Guard, Major General Courtney Carr, thanked Fishers, on behalf of all the branches of service, for launching its Hometown Help for Heroes initiative. (Photo by Sam Elliott)

The Adjutant General for the Indiana National Guard, Major General Courtney Carr was in attendance at the most recent Fishers City Council meeting to present the city with an award thanking Fishers for its Hometown Help for Heroes program.

“I’m here not just for the National Guard, but on behalf of all services and all components really to thank you all for your leadership and what you do and the initiative to help our families of those deployed,” Carr said.

The Hometown Help for Heroes initiative was launched in November of 2015. Fishers families with one of the heads of households deployed in a branch of the country’s armed services can sign up on the city’s website, Fishers.in.us, and the Fishers Department of Public Works will perform lawn mowing and trimming services as needed in the summer months and plow driveways and sidewalks during the winter. Fishers Mayor Scott Fadness said five families had their residences plowed following the recent snowfall.

“From my knowledge, it’s the only formal initiative that a city has taken and I think it’s set the stage for others to follow,” Carr said. “You’re paving the way to take care of soldiers’ families so that they have one less thing to worry about while they’re serving the nation.”

Carr presented the mayor with a token of appreciation — a minuteman statue award thanking the city for its support of military families.