You are at:Home»Current in Westfield»Bub’s is off to a strong start 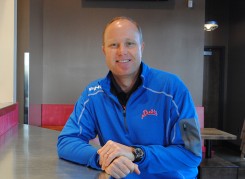 Many are familiar with the Bub’s Burgers and Ice Cream restaurants in Carmel, Zionsville and Bloomington, as well as Bub’s Café near the Carmel location. Bub’s Burgers, 960 Tournament Trail, Westfield, is the same concept but with faster service. The business arrived to the city late last year and owner Matt Frey said the first few months the business was open has been a success.

“For years, my wife and I have considered going to fast, casual counter service, and when the industry started trending that way, we thought it was the best time to do it,” Frey said. “We started scouting locations and with Grand Park and the popularity of the park, Westfield needed more restaurants, and we found this great opportunity up here in Westfield.”

The business officially opened Dec. 14. With the 2,600-square-foot building, Bub’s Burgers can minimize labor and operational costs but continue to use the same quality products that have been implemented in the other restaurants.

Frey said some are disappointed Bub’s Burgers does not have the same extensive menu as other locations. Although the burgers are still made with ground chuck, and the buns are fresh baked at Lucy’s Bakery in Indianapolis – also owned by the Freys – the average cook time at Bub’s Burgers in Westfield is eight minutes, compared to 20 minutes at the Carmel location.

The quicker cook times are also a plus when teams filter in from Grand Park.

“If you’re in between games and only have an hour, you will go to the fastest place,” Frey said. “If you want good quality food, the fast food is okay, but it’s not fresh baked buns and ground chuck. We are the real deal. Hopefully people realize that whether they are local or sports teams visiting town.”

Bub’s Burgers in Westfield is open 11 a.m. to 10 p.m. daily. Two local beers are served on tap. To view the menu or to learn more, visit www.bubsburgers.com.