You are at:Home»Current in Zionsville»Back in the day: Animals vs. automobiles: changing transportation 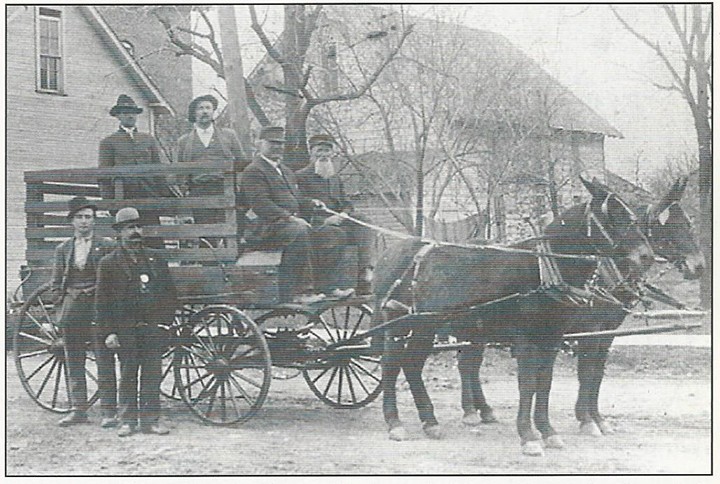 Holding the reins of this mule-drawn wagon is Lew Daughtery with his father, John David Daughtery, who owned a tile factory, next to him. Will Daughtery and Perry Watts, partners in the factory, are in the back. Beside the wagon are Harry Daugherty (Will’s son) and Marshal Bill White. The team is facing west, showing part of the old town hall. (Photo courtesy of Sullivan-Munce Cultural Center)

On Main Street in the early 20th century, a mule-drawn wagon may have vied for road space with a new (some would’ve said obnoxious) mode of transportation called the automobile. At the time, these mules may have won dominance on the road. Eventually, however, their popularity eroded.

By 1911, enough automobiles appeared on the scene that town officials enacted a speed limit, which was not recorded for the history annals. Within the next decade, cars would become a common sight around town.

In 1912, one of the first car dealers came to town. H.E. Hill, an agent for the Buick Motor Car Co., advertised in the local paper. The ad promised the Buick Model 35 “was cracker jack, and no mistake.” Price was $1,075 for the standard model. At the time, many car manufacturers sold the models without some of the equipment we now accept as standard, such as window shields. The ad does not indicate the standard offerings.

Another obvious sign of the advancing automotive age was a promotion by the Boone Co. Fair in July 1913. Fair officials offered cash prizes for the best decorated automobile. All entries were required to run in a parade.

In mid-1927, 1,944 automobiles were registered in Boone Co. The state total was 167,181. Indiana, like the rest of the nation, had just fallen in love with the automobile.