You are at:Home»Current in Carmel»Carmel Community»Valentine’s Day contest: The winning essays

No. 1 Scavenger Hunt ends with proposal, by Gail and Jay Blackburn of Carmel 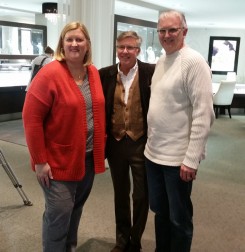 My now husband’s name is Jay Blackburn, we live in Carmel, have two beautiful girls, Grace (13) and Rachel (9).  We have been married 16 years.

In July 1998 I was offered the opportunity to go to Europe and live for 3 months and work.   Little did I know when I got this offer, my then boyfriend, was planning out an elaborate proposal for me that was due to take place the very next weekend after I was offered the job opportunity. Of course, I was to go on my European job assignment in 3 weeks.

So it was also around our “dating anniversary” so he just told me he had a surprise for me and I wasn’t to put anything on the calendar for Sat, July 11th.  That morning he sent me off on a scavenger hunt. First stop was a trip to the spa (which I love).  I got three treatments and a light lunch at Phillipe’s Spa in Indy.  At that end of it, one of the people working in there came into the dressing room and gave me a card (from Jay) that gave me my next destination.  I was to go “Parisian” (now no longer at the mall) since I was about to embark on a European adventure.

I was to pick out my favorite perfume (with the gift card in the card) and ask for a certain person behind the perfume counter that would help me with my next destination.

I got another card (from Jay) that advised me to go to “The Gap” and pick something out (with gift card again) that would I would enjoy while we would have a “gap” between us as we lived in two different countries (I purchased a pair of pants).

At The Gap then, I got my next card from the sales clerk.  I was instructed to not go home but rather just enjoy the rest of my day to myself and I was to meet him at 5 o’clock at Loon Lake Lodge.

So it was a beautiful day so I went to Flowing Well Park in Carmel, and took a walk, relaxed on the trail, on a bench in the sun for a bit. I then headed to Look Lake Lodge to meet my date

Jay had strategically selected a table there across from a fireplace.  At the table was a vase with a few roses in it, along with my handsome Jay.   We got something to drink and started with some appetizers and about every 5-10 min a staff person would bring out another rose with a note attached to it.  Each note was a reason he loved me.  I soon had a few dozen plus roses.

As we got our “special” menus to order dinner, I opened my menu and it had a poem which was Today’s Specials.  It was a poem Jay had written himself and at the end of the poem he asked me to marry him…..and he got down on one knee at the side of the table, in front of the fireplace and asked me personally if I would marry him.

Well I was balling by this time of course and forgot to answer him!  Of course my answer was yes.  It was amazing to me the amount of time, thought and preparation he had done for the ENTIRE day.    What an awesome man he is.  He then said, well, there is still more…….he had surprised me with tickets to see Kenny Loggins in concert at the outdoor theatre at Butler.   (Which was kinda funny has he had asked me a long time before that if I wanted to go to the concert and said no I didn’t want to)…but in reality if topped off the night nicely.

To bring it full circle, we danced at our wedding reception as our first dance to the Kenny Loggins song “Forever” which our band had to learn how to play as a special request by us both.  In addition, at my bridal luncheon, Jay had written another poem, have it calligraphied, watercolored, and framed for me.  He wrapped it as a gift and gave it to him mother to bring to me at my luncheon…..of course again, I couldn’t read it myself as I was crying, so my girlfriend had to read it to me.

I am a truly blessed woman even today.  Jay is very caring, thoughtful, loving and always puts myself and our children first.  God blessed me with a wonderful man, husband and father.

No. 2 Life’s like a box of chocolates by Lindsay Campuzano 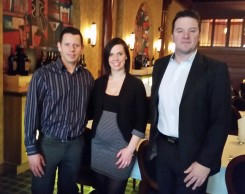 From left to right: Armando and Lindsey Campuzano, then Jeremiah Hamman, Director of Prime 47. They received a gift card for dinner.

My husband, Armando, proposed to me on February 17, 2008. Since we’d only been dating about a year and Valentine’s Day had just passed, it came as a complete surprise.

Armando had recently purchased a new home and we had invited my parents and younger siblings over for dinner and to see the new place. After dinner, as we were chatting in the living room, Armando disappeared into the bedroom. He was gone long enough that I was beginning to wonder what he was up to, when he emerged with a box of Ghirardelli chocolates. He handed them to me and asked me to pick one. I am not a huge fan of chocolate so I declined and handed them to my sister to pass around the group. As the box of chocolates made its way around the room, Armando insisted that I try one. I agreed and when the box was in my lap, I started to select one. He stopped me, telling me there was a special one he wanted me to try. Nestled among the chocolates, he had wrapped a beautiful ring in a Hershey’s Kiss wrapper. In front of my family, Armando asked me spend the rest of our lives together and I happily agreed. Eight wonderful years later, it’s the best chocolate I’ve ever received.

No. 3 The package deal by Mary Pierce 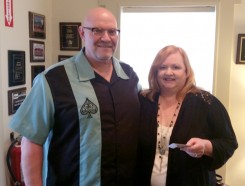 John and Mary Pierce. They won a Kroger gift card.

My story is not a traditional engagement, because as my oldest son told my future husband, “She is a package deal.” (My boys were ages 9 and 14.) My future husband, John, had never been married nor had any children. That was December 2002.

Fast forward to March 2008, John told me to pack an overnight bag with clothes suitable for dinner. He had a surprise date planned. I did not know that he had already asked my father for permission to ask me to get married. We had discussed getting engaged, but I had no idea when it would happen.
So, on March 20, 2008, I packed my bag and off we went. I had no idea of our destination and no hints. We arrived at The Canterbury Hotel where John made reservations for the presidential suite, which was incredible. We entered the presidential suite and there was an enormous beautiful floral arrangement. I turned to John and said, “Wow, they take care of everything.” At that point John said, “I took care of that. They are yours. I took care of this as well.” He took out a small box, got down on one knee, and asked, “Would you be my wife?”

Of course, I said, “yes.” After I said yes, John said that you have two hours to call everyone and then we have reservations at St. Elmo’s and tickets for the Bruce Springsteen concert. Following a wonderful dinner, we went to the concert where everyone congratulated us. John planned and surprised me with the most wonderful, magical engagement.

We were married June 8, 2010. Both of our sons gave wonderful toasts. Everyday, I am thankful for a wonderful man who married a “package deal” and became the best husband and father a woman could ask for.