You are at:Home»Current in Carmel»Carmel Community»Carmel High School students named Indiana Runners of the Year 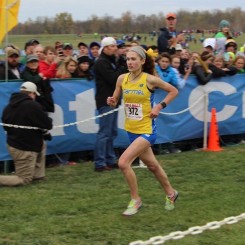 Sarah Leinheiser runs to the finish line at the 2015 IHSAA state meet.

CHS junior Sarah Leinheiser and senior Ben Veatch were the individual state champions, and now both have been selected as the Gatorade State Cross Country Runner of the Year. The winners are chosen based on athletic impact and demonstration of academic achievement. The panel also assesses character, sportsmanship and leadership qualities.

“Anyone who wins this award is involved in the community and has good leadership,” Veatch said.

The Gatorade Company and USA TODAY High School Sports select the winners for the program, which has been in existence since 1985.

Leinheiser has been running since fourth grade as a Carmel Pup. She became a more serious runner entering middle school because she says her brother motivated her. 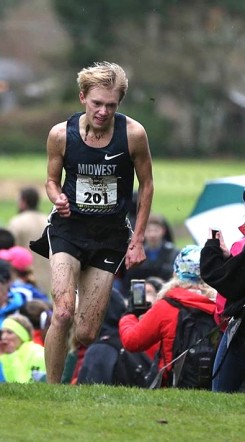 “He was really good, so I thought I might be good too,” Leinheiser said.

She finished seventh in the U.S. at the cross country Nike Nationals and eighth at the Foot Locker Championship. But her leadership is as evident as her talent.

“I think I show good leadership, because I tell my team I’m running for them and for God and not for myself,” she said.

Like Leinheiser, Veatch began running as a Carmel Pup in elementary school. He said he and his best friend – Leinheiser’s brother – joined because they “were always the fastest runners on the playground,” he said.

Veatch finished second at the Nike Nationals and third at the National Foot Locker Championship. Despite his individual accomplishments, his focus is on the team.

“They are my motivation and the reason why I run,” he said.

Leinheiser doesn’t know which school she will attend after graduating from CHS, but she is confident in one future plan.

“The only thing certain is that I am definitely running in college,” she said.

Veatch has signed a National Letter of Intent to run for Indiana University in the fall on an athletic scholarship.