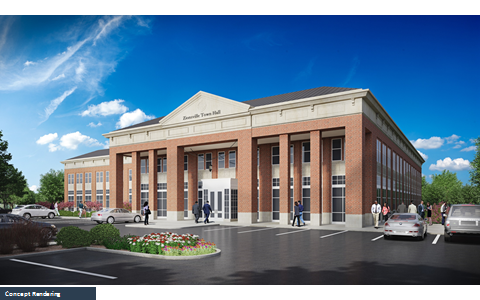 The Zionsville Town Council held a special meeting Jan. 21 to discuss a plan to finance a new Town Hall building.

Instead of selling bonds as previously discussed, the council is considering a plan that would allow Keystone Realty Group to act as a developer and manage the construction and financing of the building. The town would make biannual payments on the building for 25 years and become the owner once the debt is paid.

“It would be sort of like if you bought a house on contract from a seller,” said Bruce Donaldson, an attorney for the town.

This option would allow the town to avoid paying fees associated with bonds and have greater discretion on which funds are used to make payments among other benefits, Donaldson said.

The estimated cost of the project is $10.2 million. Angie Steeno of accounting firm Crowe Horwath presented a plan to make the estimated $284,472 biannual payments using mostly funds that will be available to the town in the future but were not included or available in the 2016 budget.

The proposal calls for using $283,066 in additional County Option Income Tax revenue that was not calculated in the most recent budget, $115,000 from food and beverage taxes, $55,000 from the Cumulative Capital Development Fund, and nearly $200,000 from town and county Tax Increment Financing districts.

But not every councilor expressed support.

Councilor Tom Schuler said he found it hard to believe that the town could find enough new money to make payments on the building when the budget has been so tight in recent years.

“I’m surprised that we would be that aggressive when we’ve also got a lot of other issues around the town,” he said, citing increased traffic on roads and raises for town employees.

Other councilors said that the project isn’t just about the money, but perception. The current town hall is in an aging former church building with ongoing maintenance and space issues, which could be a factor in business owners choosing to go elsewhere, said councilor Joshua Garrett.

“If I’m (holding a meeting) in a closet with a boiler that’s busted, what kind of impression does that make?” Garrett asked.

CSO Architects is working with the town to finalize a development plan for the new town hall, which is expected to go before the Plan Commission once complete.