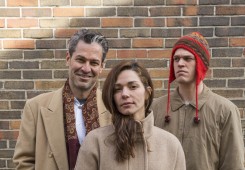 Bill Simmons (who plays Tom), Sarah McGee (who plays Kyra) and Tyler Ostrander (who plays Edward) will be on stage in “Skylight.” (Submitted photo)

The decision to present “Skylight” was easy for Theatre on the Square artistic director Lori Raffel.

“Theatre on the Square chose “Skylight” for one reason: Bill Simmons,” Raffel said. “I have watched Bill on stage in Indy theatre for years and worked with him at the Phoenix Theatre. He is a treasure and the opportunity to work with him was just too wonderful to pass up.  He brought with him Gari Williams to direct, and that clinched the deal.”

Simmons performed at TOTS for several years, then moved on to Phoenix Theatre, Indiana Repertory Theatre and others. His last TOTS production was in 1996, “Laughter on the 23rd Floor.”

The play will run on weekends from Jan. 22 to Feb. 13 at the Christel DeHaan Main Stage. “Skylight,” written by top British playwright David Hare, won the 2015 Tony Award for Best Revival of a Play.

Other cast members include Sarah McGee and Tyler Ostrander. McGee, who lives in Carmel, is making her TOTS debut. Raffel is a board member of Carmel Community Players and has directed there for nearly 10 years. McGee has been in several productions that Raffel directed at CCP at Clay Terrace.

The plot revolves around Kyra Hollis (McGee) receiving two unexpected visitors at her London home: first the boy she used to nanny (Ostrander), then from his father and her ex-lover, Tom Sergeant (Simmons), a successful restaurateur whose wife has recently died. The two attempt to rekindle their once passionate relationship, only to find themselves locked in a battle of opposing ideologies and mutual desires.

“I hope that people take away from this play that even when the circumstances are stacked against you, there can be second chances for all of us,” Raffel said.

In addition, Raffel said she hopes audience can see that “TOTS can indeed attract first-rate actors, directors, and designers to tell stories with grace and grit. We are getting better at all of this.”