You are at:Home»Night & Day»Two veteran actors play seven roles in “The Mystery of Irma Vep” 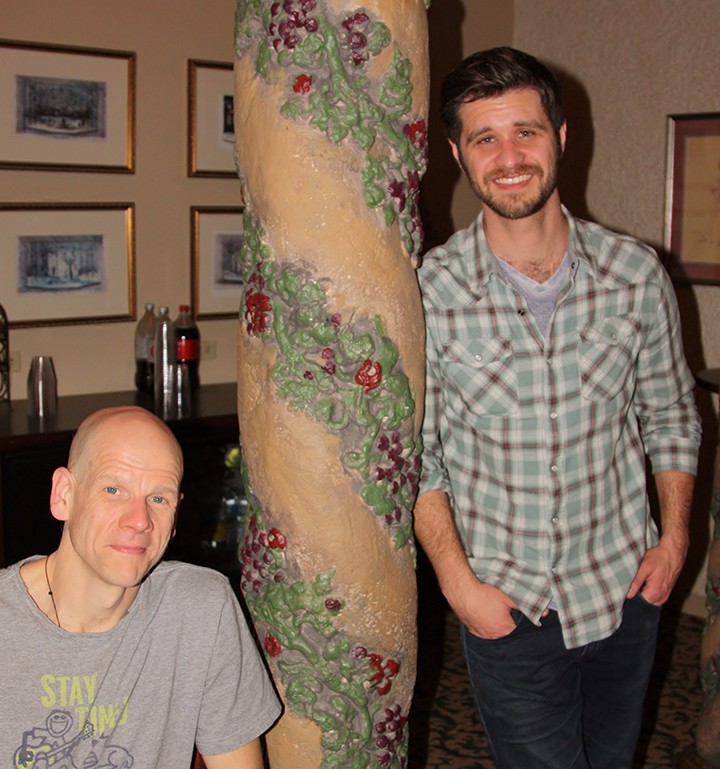 “It’s a simple matter of mathematics,” explained IRT playwright-in-residence James Still, who is directing the play. “When you go back stage and they put you in that particular costume you know who you are supposed to be.”

“It’s like the high-wire act that we all want to do as actors,” said Truschinski, who jumped at the chance to reprise a role he had not done since college. “You are going without a net, and when you fall, you fall off badly.”

Is there the occasional misstep in lines? Of course, answered Johansen.

“Part of the fun for an audience is recognizing that mistake and saying, ‘I think they screwed up there,’” he said. “But if something goes wrong, you can go ‘Oh, no!’ or you can go ‘This could be fun.’ Often, if there is a hiccup that can be an opportunity for something wonderful.”

Part satire, part comedy, part horror, the two-hour play is set in Mandacrest, England, the home of Lord Edgar, an Egyptologist, and Lady Enid, his second wife. Lord Edgar has not recovered from the passing of his first wife, Irma Vep. He blames a werewolf for the death of Irma, who is later discovered by Enid (also attacked by a vampire) locked away in a cell. What follows is an expedition to Egypt in search of the secrets of immortality and a series of hysterical revelations.

In order to ensure cross-dressing, licenses to perform this play include a stipulation that the actors must be of the same sex. The show requires a large number of sound cues, props, special effects and quick costume changes. With the help of costumes held together with Velcro and magnets two dressers will make the magic happen backstage.

“Some of the changes will happen in less than 15 seconds,” said Trushchinski. “You go off stage through one door as one character, come to a station where they rip everything off to a costume underneath or they put something else on you and then you walk back through another door as another character.”

Truschinski is a fulltime actor at the American Players Theatre near his home town of Spring Green, Wis. IRT visitors may recall his role as Sherlock Holmes in last season’s “The Hound of Baskervilles.” Indianapolis resident Johansen teaches acting in the department of Theater and Drama at IUPUI, and has appeared in 42 roles at the IRT over the last 20 years.

Truschinski actually has done “Irma Vep” as an undergrad student studying theater 15 years ago at the University of Wisconsin-Whitewater. Although Johansen has never done “Irma Vep,” he has played multiple characters as one of the Clowns in “39 Steps” at the IRT in 2011.

“There are about 60 characters in that one with only four people in the cast,” said Johansen. “One man plays the leading man, a woman plays three or four roles, then the two clowns play everybody else. I feel like this (“Irma Vep”) is of a similar ilk; it’s like ‘39 Steps’ without the two leading people — just two idiot clowns like us running around.”

“The most fun part about the play for me is that it is live,” added Truschinski. “It is happening. Now.”

The Mystery of Irma Vep