You are at:Home»Current in Fishers»Rosenthal honored by key to the city 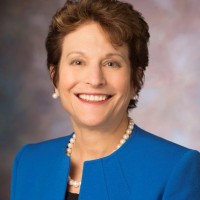 Just ahead of her retirement as president and CEO of Conner Prairie at the end of 2015, Ellen Rosenthal was honored and presented a key to the city by Fishers Mayor Scott Fadness at the Dec. 21 city council meeting.

“This is really a bittersweet moment for me to present this key to the city,” Fadness said. “I can tell you, for someone who kind of geeks out like I do on organizational leadership and having a vision and pursuing that with tenacity and vigor, I have to tell you I’ve learned a lot from my lunches with Ellen the past few years.”

Rosenthal joined Conner Prairie in 1999 and was named president and CEO in 2005. She announced her end-of-the-year retirement in June.

“Thank you for this wonderful honor,” she told the mayor and city council. “Being in Fishers has really been a dream come true. What an ideal community to grow Conner Prairie — an institution that is about having a vision, inspiring learning and inspiring curiosity and in a community that values education and values families and children and innovation and entrepreneurship and doing things a different way. It’s really a match made in heaven. I am so happy that Fishers grew and developed as Conner Prairie grew and developed because now it seems like we planned it all along — which we didn’t, frankly, but it turned out just right.”

Rosenthal will continue to serve the city as part of the mayor’s steering committee — “so I may be retiring from Conner Prairie, but not from Fishers,” she said.

Fadness praised Rosenthal’s work with Conner Prairie, which during her tenure was awarded the nation’s highest honor for museums — the National Medal from the Institute for Museum and Library Services — among other accomplishments.

“She took Conner Prairie to a whole another level that I don’t think anybody in the community or that organization might have anticipated. I think she did it with class and with style and the residents of Fishers and the tax base of Fishers frankly have all benefited from the work of Ellen and her family,” the mayor said. “On behalf of the city, thank you so much for your years of service, for your commitment to Fishers, your pursuit of a vision and your ability to execute. So on behalf of the City of Fishers, I want to offer you a key to the front door.”