You are at:Home»Current in Zionsville»Habitat for Humanity, Bone Dry Roofing partner to give veteran new roof 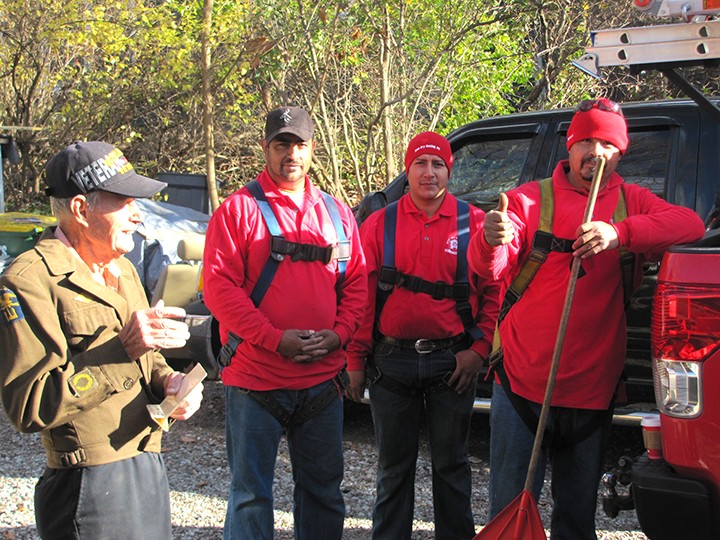 Veteran Floyd “Schultzee” Schultz was hoping someone would help him patch a leak in his roof. He didn’t expect to have the entire thing replaced.

“I heard about Floyd from a good friend of mine (Pete Hudson),” said Steve Furst, executive director of Habitat for Humanity of Boone Co.. “(Floyd) just could not afford a new roof.”

Furst reached out to another friend who owns Bone Dry Roofing, who donated free labor to replace the roof.

“We were blessed to have shingles left over this year,” Furst said. Able to complete 80 percent of the roof with the donated Habitat shingles, Hudson donated the last few bundles, and the roof was completed in less than a day.

Schultz, who was interviewed by WISH-TV during the roof replacement, appreciated the work.

“I think this is the greatest thing that’s happened to me in a long time,” Schultz told the TV crew.

Schultz has been active in Boy Scouts and the American Legion in Zionsville. He is survivor of D-Day at Normandy and lied about his age in order to join the Army during World War II.

“It was wonderful that we were able to do this close to Veterans Day,” said Furst, who is a Vietnam veteran.

“Habit for Humanity around the country is trying to focus pretty hard on the veterans’ initiatives, to be aware of veterans’ needs,” said Furst, citing interior home repair and exterior maintenance as examples.

This comes on the heels of the first Habitat Veterans Build in Boone Co. to provide housing solutions to veterans and their families. That home, dedicated Nov. 11, is occupied by a veteran of the war in Iraq and his family.