You are at:Home»Current in Westfield»Isley Plumbing receives IHS award 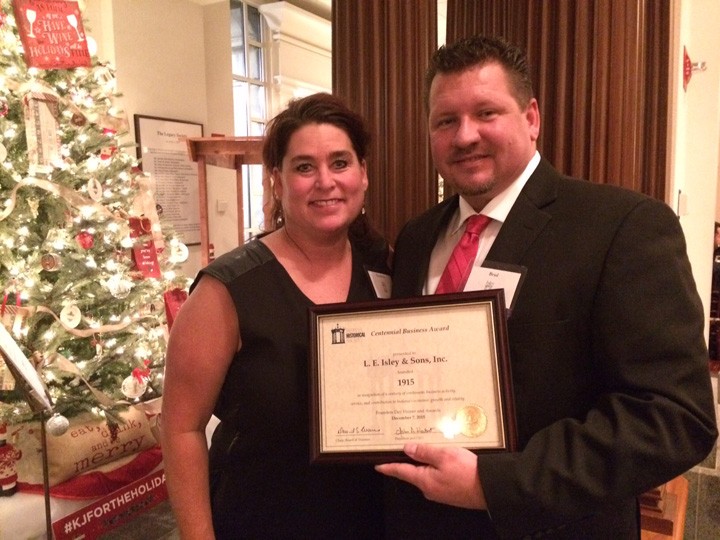 Brad and Doug Isley are the two great-grandsons of L.E. Isley, the founder of the plumbing company.

Since its finding in 1915, the company has grown from one truck to 13 trucks.

“Celebrating the 100-year anniversary lets us reflect on how each generation progressed as the years passed,” Brad said. “Now in our fourth generation, we are experiencing the demands for efficiency and water conservation. Technology in the plumbing industry keeps changing from the products and tools we use to how we engage the customer and their experience. One hundred years is a milestone for any business. Isley Plumbing has stayed true to our family.”

With receipt of the award, Isley Plumbing is added to the Historic Business Register, founded in 1992 to highlight Indiana’s business and industrial past.

“We’re proud to say more than 500 companies have since received the award and been added to the register,” IHS President and CEO John A. Herbst said. “L.E. Isley & Sons, Inc. is an example of a company that has not only stayed in business in central Indiana for the last 100 years, but that has remained family owned and operated. It is now run by the founder’s great-grandsons. It is a remarkable achievement and one that deserves to be recognized.”

A list of the other businesses in the Historic Business Register can be found at www.indianahistory.org.

In addition to its Centennial Business Awards, the plumbing company also received the Luminary Award at the Westfield Chamber of Commerce’s Lantern Awards this year. The Luminary Award rewards Isley Plumbing’s longevity within the community. Other awards include being an Angie’s List Super Service Award Winner since 2002 and recognition the Indiana Plumbing Heating Cooling Association at their Annual Convention in downtown Indianapolis.