You are at:Home»Current in Carmel»Indiana State Police advise on handling active shooter scenarios 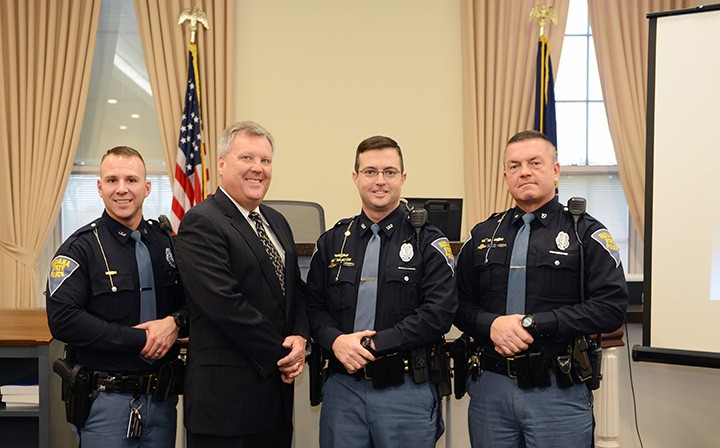 Carmel City Judge Brian Poindexter, second from left, opened his chambers for a presentation from the Indiana State Police troopers – from left, Ryan Kenworthy, Jon Caddell and Aaron Gaul – on how to respond in an active shooter situation. (Photo by Theresa Skutt)

Indiana State Police wants to give the public the best chance to survive in dangerous situations.

“We have a scenario where the audience is able to observe what goes on and give them a sense of how long a two- to four-minute response would be from law enforcement,” ISP trooper Aaron Gaul said.

The presentation uses the theme of Run, Hide, Fight.

“Obviously the first two are preferable,” Gaul said. “We don’t necessarily promote the third one, but there are situations where that might be the only option.”

Gaul said there are different factors in the decision to run or hide or lock the shooter out. Gaul said if individuals should decide to escape, they should be aware of their first option for an exit.

“That exit might not be an option,” Gaul said. “If you are going to hide or lock out, how secure can you make the room that you are in? Are the doors locked? Are the windows covered?”

Gaul said fighting back is a last resort.

“It may come down to that, and we have to think outside the box in order to defend ourselves and those around us,” he said.

The main thing is to have a plan and examine “what if” scenarios, Gaul said.

The program began to provide education on how to handle an active shooter in a school setting. Gaul said they realized during the presentation the information could work elsewhere to benefit anybody.

“The same information can benefit you when you are going out to a mall or going to church or a different business in a public setting,” Gaul said. “It just increases your level of awareness.”

Gaul said when incidents happen around the world, like the Paris terrorist attacks and San Bernardino, Calif., shootings, requests for the presentation increase.

The program also instructs individuals how to be aware of surroundings for personal safety. Gaul said individuals can take measures like parking their car under a streetlight or having keys out and ready to get into their car.