You are at:Home»Current in Carmel»Carmel Business Local»Edwin the Duck has deep Indiana ties 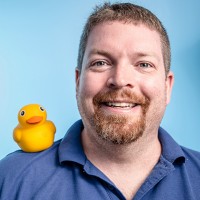 Edwin the Duck has a decidedly Indianapolis-area flavor.

Edwin the Duck, with help of a mobile app, is a learning toy that can educate and entertain through its interactive functions.

It was created out of Carmel’s pi lab by Carmel residents Don Inmon and Matt McBeth and began its launch in 2014. Fishers resident Amy Unger, a Carmel High School graduate, serves as director of marketing.

“We utilized as many local agencies, talents and consultants that we could,” said pi lab communications director Kara Reibel, who lives in Fishers. “We found almost everything we need right here in the Indiana to make Edwin a possibility.”

Edwin the Duck uses BLASTmedia from Fishers as the public relations firm.

Alicia Thorson, director of education, was born and raised in Indianapolis but now lives in Wisconsin.

Plow Digital in Indianapolis created the original Edwin app. In addition, pi lab is working with Foxio, which operates out of Launch Fishers.

Avance Design, an Indianapolis business, helped with the early prototypes of Edwin. The Indianapolis law firm of Densborn Blachly also has been a great help, Unger said.

Integrated Distributed Services, Plainfield, does the shipping for direct orders from edwintheduck.com. The contact for IDS is Michael DeFabis, a Carmel resident.

The original singers/songwriters were from Columbus, Ind. But since they have moved on to other projects, Unger said they are looking for local options for new songs.

“We are a private company in a large growth stage and are not ready to divulge sales and production figures, but we should have some announcements in that regard this spring,” Unger said.