You are at:Home»Current in Carmel»Carmel Community»Eagle Scout project leads to bat houses in 3 Carmel parks 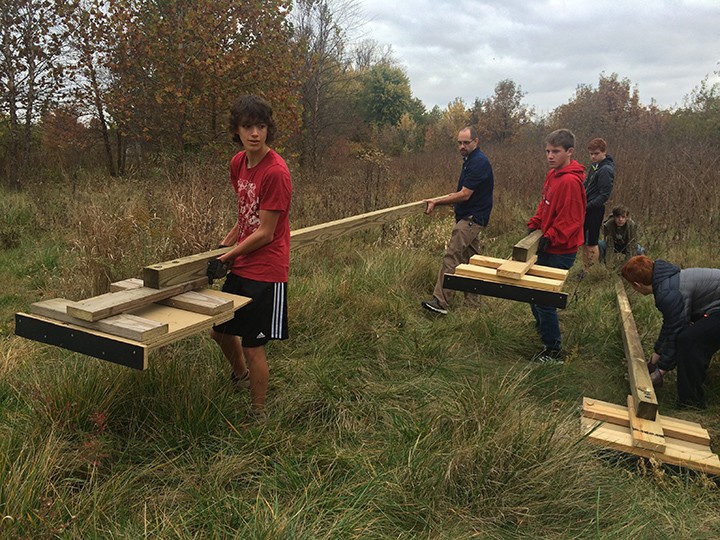 While doing researching for a building project to earn his Eagle Scout badge, Grant Lisby had a flashback.

“When I came across the bat house idea and learned how a single bat could eat almost 1,000 mosquitoes per night, it reminded me of going to camp and feeling like I was being eaten alive by mosquitoes,” said Lisby, a 16-year-old Carmel resident.

“Bats are an essential part of the ecosystem and to our department because they provide new habitat, pollinate flowers and control pests,” said Lindsay Labas, CCPR marketing director. “When Grant proposed his project idea we were onboard for these reasons, and because many bat species are in decline due to habitat loss and disease. We enjoy working with Eagle Scouts throughout their projects from conception to completion as they work toward achieving the highest rank in scouting.”

Lisby, a member of Scout Troop 191, constructed 10 bat boxes in Hazel Landing, Founders and River Heritage parks with the help of his troop along with family and friends.

Lisby has completed his project and his Board of Review is tentatively scheduled for January. He hopes to have his Eagle Scout badge by mid-winter.

Lisby said what he learned through the project applies to his desire to one day be an entrepreneur.

“The bat house project was actually my third attempt at an idea,” he said. “I learned to have patience as I had to work through the challenges of the first two projects. I also learned how hard work and determination will lead to success along with having a talented, hard-working group of people helping me. Since my project, I have received interest from people wanting to buy my bat houses. I am currently in the process of planning my new bat house building business, Rad Chad’s Bat Houses. I will apply my new skills in budgeting, construction and management.”