You are at:Home»Current in Carmel»Carmel Business Local»Carmel resident’s hoop dreams paying off 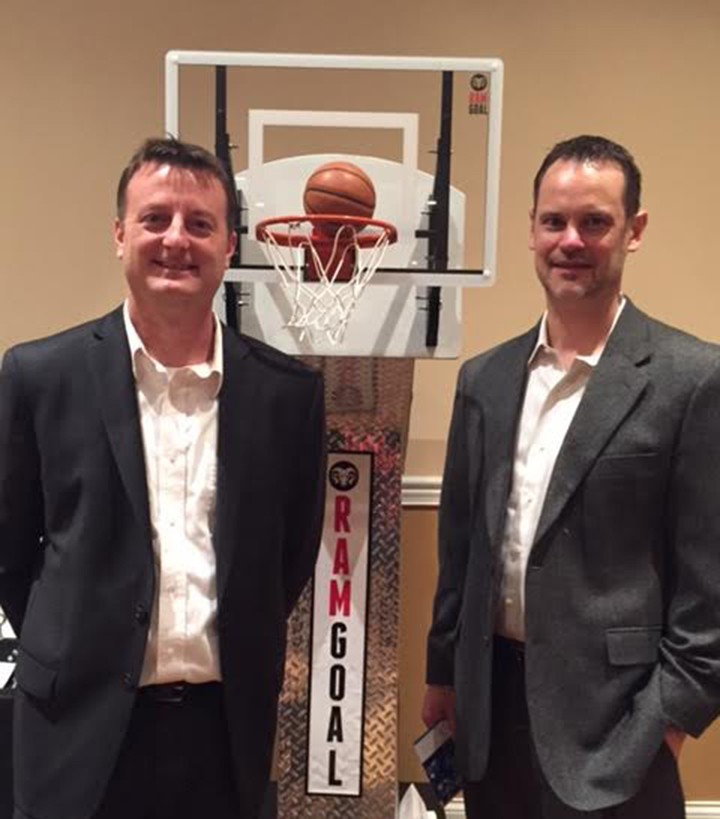 Belveal’s son, Cole, was then 7, and Jason’s son, Keaton, was 8, and both families were living in Cicero at the time.

“Literally within hours both were broken,” said Belveal, who moved to Carmel in 2012. “So since they both loved it, we each bought another one. We were blaming the boys for being too rough on them instead of (thinking) it was just a horrible product with poor construction. After they destroyed the second one, we decided we could build something better.”

With their engineering backgrounds, Belveal and Connell figured they could come up with a more durable indoor basketball hoop. Belveal went to the University of Wyoming for mechanical engineering. Connell went to Purdue for chemical engineering. The result is they developed RAMgoal, which is made to mount on a wall in a basement or man cave. The RAMgoal is adjustable up to 13 inches.

“After we designed five prototypes, we came up with something that couldn’t break,” Belveal said. “We actually cut it out of a landscaping wagon, which is made out of 16-gauge steel. We made a backboard frame on my son’s wall. He played on it for three or four months, and he couldn’t break it.”

In 2013, Belveal took it to a machine shop in Noblesville to see if they could build more prototypes, realizing there was a demand after several parents inquired about it.

“We sold the five prototypes in a couple of days,” Belveal said.

So he decided to have the shop build another 30, and those were sold before they were finished.

“Over the last couple of years, we’ve refined it, made it even stronger,” Belveal said. “It looks like the real thing you would see on a school basketball court. It can take an immense amount of abuse.”

Belveal ordered 500 to be made. They put them up on Amazon and got their first real order in February. They have sold more than 360 goals in the past nine months.

“I would move it up an inch and a half and it would motivate him to jump higher,” he said. “His vertical leap went crazy. He was able to out jump everyone on his team, just because he figured how to use his body, and it motivated him to jump higher.”

It is mounted on studs in the wall through the drywall. Belveal said the plastic hoops broke easily.

“It eliminated the noise because the back of the door hoops rattled the whole house,” he said. “Because there was at one level, kids get bored with them pretty quick because they can’t adjust them up or down.”

Belveal, who personally calls everyone who has purchased a RAMgoal, has found that 20 percent are bought for adults. The RAMgoal, which includes a mini-ball, normally sells for $159. For more, visit ramgoal.com.