You are at:Home»Current in Zionsville»Zionsville considers options for north-south road on town’s west side 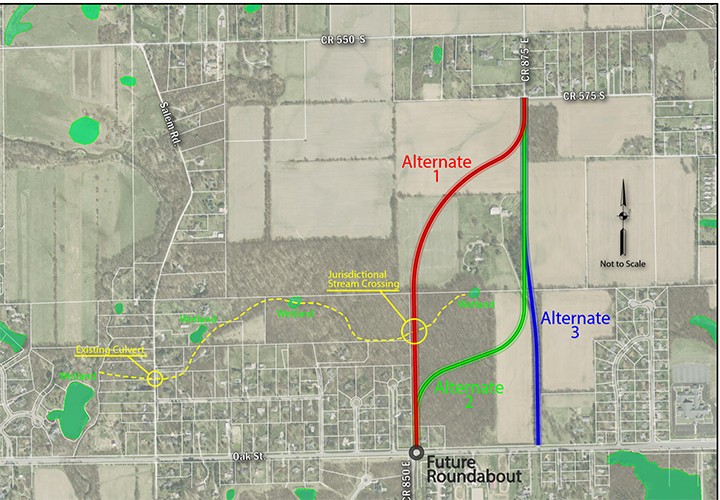 Three possible routes have been identified for a future north-south road in west Zionsville. (Submitted photo)

Although its construction is likely years away, Zionsville has completed a study to assess possibilities for a proposed north-south road connecting CR 575 and Oak Street on the west side of town.

“For many years, it was part of our thoroughfare plan and future transportation plans for Zionsville. It’s been in there since at least 2000,” said Lance Lantz, Zionsville superintendent of street/stormwater services. “The 2000 transportation plan is the oldest one I have archived.”

The town’s transportation plans were amended in 2010, resulting in the road being eliminated from the plan as a specific project and identified as a study area for the future.

“The general north-south mobility is obvious when you look at road maps and there are just very limited ways to go to the northwest portion of Zionsville where the residential areas are growing,” Lantz said. “It’s needed now and its need will only increase in the future.”

The study prepared for the town by Beam, Longest and Neff LLC included three options for a proposed connector road ranging in total price from $1.142 million to $1.47 million.

At their northern points, all three options would begin at the intersection of CR 575 S and CR 875 E. Two alternates, one needing a bridge to cross a small stream, would connect to Oak Street at CR 850 E. Alternate 3 would create a new intersection on Oak Street to the east of CR 850 E.

“That would be kind of a drawback to Alternate 3 because it introduces another intersection on a busy street,” Lantz said.

“There is nothing imminent on this project that the town is going to initiate,” he added. “One of the purposes of having a transportation plan or any future land planning exercise is so that at such time as development comes into the area — there is one very large property there — if that property would ever happen to be sold to a developer, that is when we have the approved transportation plan to force them to install a roadway network that is in support of our plan. It helps the town with its planning and approval processes in the future when we have these identified routes available to developers.”