You are at:Home»Current in Zionsville»Pitman-Moore an early leader in animal health 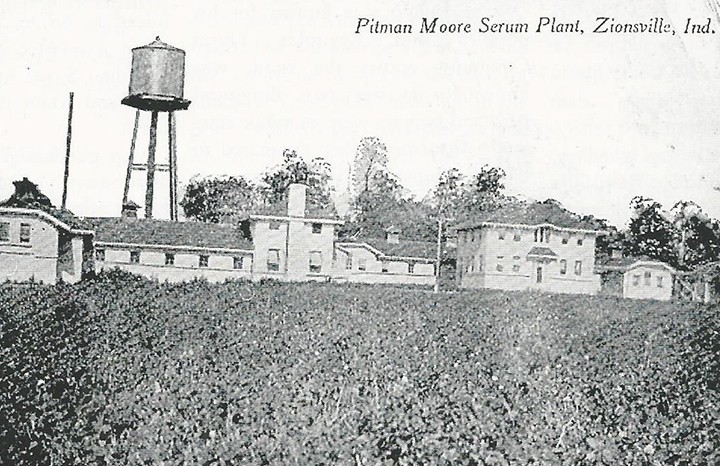 The Pitman-Moore Company was on land now occupied by Dow AgroSciences. (Photo courtesy of SullivanMunce Museum)

Before global manufacturers Dow AgriSciences, DowElanco or Elanco Animal Health moved into the state, there was the Pitman-Moore Company, a manufacturer of animal health products just southeast of Zionsville.

Two years under construction, Pitman-Moore was built on the former Moore farm with an operational facility completed in 1914. The company sprung up in response to the rise of cholera in hogs. Thousands of hogs died annually because of the disease, clearly a crisis for the nation’s farmers. Pitman-Moore took on the responsibility of manufacturing a serum to combat the outbreak.

According to an Indianapolis Star article on Oct. 3, 1914, Pitman-Moore is “without an equal in point of cleanliness and scientifically prepared serum.” In fact, the company was the “only one in the country making commercial serum, which is equipped with a complete bacteriological laboratory.” Seven separate buildings comprised the complex plus pens for the hogs. Add the land planted for corn, and the complete complex measured 53 acres.

The newspaper proclaimed that Pitman-Moore was the “start of a new industry in the state.” Harry C. Pitman led the company as president. By 1915, he became well-known as a leading expert on the cholera serum. Eventually the company expanded into making other products.

Pitman-Moore’s offerings eventually were folded into the mix of Elanco, which was formed by pharmaceutical manufacturer Eli Lilly and Company in 1954. From there, through mergers and buy-outs, Dow AgroSciences planted itself on the current site.