You are at:Home»Current in Westfield»NHTSA recommends seatbelts on school buses 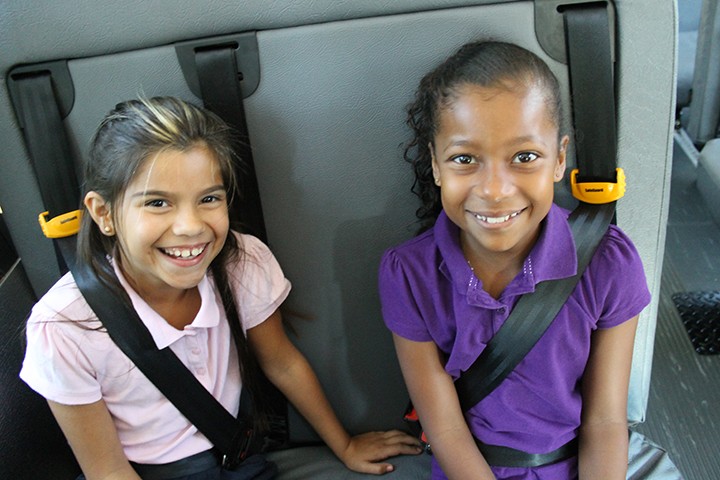 An example of the three-point lap-shoulder seatbelts NHTSA recommends all school buses to use. (Submitted image)

Indiana Mills and Manufacturing Inc. in Westfield is the manufacturer of SafeGuard Seats, a three-point lap-shoulder seatbelt company for school buses.

“The National Highway Traffic Safety Administration said that every child on every bus should have a three point seat belt,” said Julie Cooley, director of corporate marketing communications for IMMI. “A three-point seatbelt is just like the ones we have in the cars versus just a lap holding seatbelt. (IMMI) has been the leader in making seatbelts on school buses for almost 20 years. We were the first to engineer and develop those.”

Cooley said every school bus seat that they manufacture is made in Westfield. Those seatbelts are distributed across the U.S. She said she expects this announcement to bring more jobs to Westfield with the increased demand.

“Typically, school districts order six to 10 new buses (each) year depending on the district. The life of a bus is 12 to 15 years,” Cooley said, mentioning she believes that Westfield Washington Schools will phase the new buses in over time.

“We’ve seen a lot of school districts looking at when they buy new buses to use those buses with lap-shoulder seatbelts on the highways where kids aren’t protected and buses are traveling at 55-plus miles per hour,” Cooley said.

“We have surveyed our drivers and talked with our building principals about their impressions of the seatbelts and any issues that have come up,” Keen said. “This is still short-term data, and we will continue to collect. We have never had a safety issue in the past, other than minor fender benders, and that continues.”

Keen said that the NHSTA announcement was a recommendation and not a requirement since they recognize the cost issue of trading out old school buses with new ones.

“We will probably recommend purchasing buses with seatbelts on all new and replacement buses, as that is fiscally possible, so over time, our entire fleet will have belts,” Keen said. “If the legislature provides funding for schools and mandates them, we will be ahead of the curve. Again, we have never had, in the past 20 years, any issue with bus safety. We are simply providing another layer of safety, in a fiscally responsible way, and are glad that IMMI offered to pilot with us so that we could gather data to make sure the decision is the correct one.”

For more about IMMI, visit www.imminet.com.