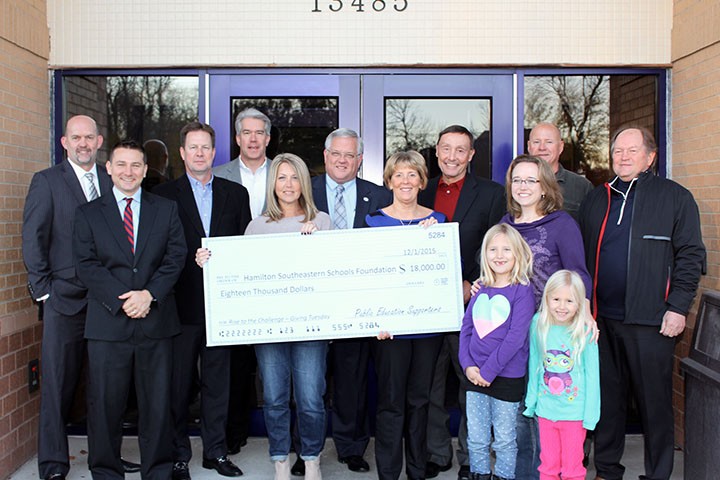 With the past holiday influencing the idea of thankfulness during Thanksgiving followed by two days to incentivize shopping for deals during national and local retailer promotions, the idea of “giving back may seem overdue. For the Hamilton Southeastern School Foundation, celebrating Giving Tuesday on Dec. 1 to benefit the local school district made perfect sense.

Giving Tuesday is an international day where businesses, families, individuals, charities, organizations and more celebrate the spirit of giving back through donations. According to givingtuesday.org, more than 30,000 partners in 68 countries participate in the annual tradition, including the HSSF.

“At it’s heart we have become a very commercial society and this time of year we certainly take a day to give thanks on Thanksgiving, then followed by Black Friday and Small Business Saturday and then Cyber Monday,” Executive Director of HSSF Freedom Kolb said. “This is a way to say, ‘Let’s restore what’s important to our community in a season of giving instead of a season of getting.’”

“Really, Giving Tuesday is a global initiative but up until last year you didn’t really see a lot of local effort,” Kolb said. “The whole concept behind it is to activate local communities to give locally. We thought there really is not a bigger cause that unites Fishers other than education because our schools are our second largest employer, (we enroll) 21,000 kids and we’re fourth largest (district) in the state.”

Titled as #HSSFUnselfie for use with social media, this years campaign marks a unique experience as several donors have already come together to kick start the fundraising initiative by pledging $18,000 through HSSF’s Rise to the Challenge goal. That means for every dollar donated on Giving Tuesday, it will be doubled up to a total of $18,000.

“The goal with the Rise to the Challenge group was basically to extend the impact of whatever could be raised locally,” Sara Mills Henderson, an HSSF member and mother of two HSE students, said. “It’s sort of treated like a match. We’re trying to inspire people to match the $18,000 that we had already raised. We know we have at least $18,000 so we’re hoping to double it through additional donations through the community at large.”

With typical school donations, donors can choose where their donations go, but with Giving Tuesday donations the funds go directly to the foundation.

“Typically if somebody gives a donation a lot of those funds are directed exactly where they want them to go,” HSSF Board Member Susan Binford said. “So somebody may say they want it to go to physical fitness, to mental health. These funds for Giving Tuesday allow us as a foundation to fund interesting, creative projects that we typically can’t do through our standard donations. That’s what’s really important about Giving Tuesday is those unrestricted funds that really fuel the creativity of the foundation.”

The funds donated will be used for various programs that directly impact all Hamilton Southeastern schools such as scholarships.

“The foundation is so good because everything that you give is staying local; staying in Fishers and having a positive impact on, really, the future on our community,” HSE School Board President John DeLucia said. “Big drivers of the foundation are innovative ideas, scholarships for students and then grants for teachers, and they do it very well. That’s what really helps make the school community so dynamic. You can’t always do that as an entire corporation.”

The Hamilton Southeastern Schools Foundation will be accepting donations as part of the Rise to the Challenge campaign all day on Dec. 1. To learn more, visit hsefoundation.org/