You are at:Home»Night & Day»Santa, singing and more at the Indianapolis Symphony Orchestra’s Yuletide Celebration 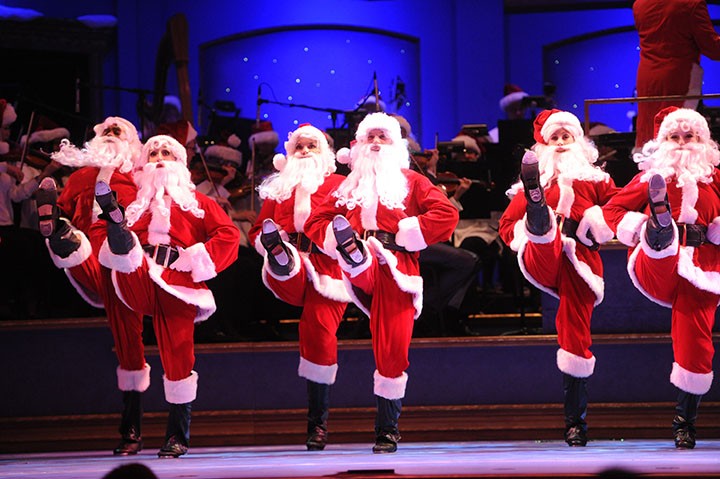 There’s a long Santa’s list of things to like about the Indianapolis Symphony Orchestra’s annual IPL Yuletide Celebration. But what dancer/singer/choreographer Anne Beck cherishes the most is the reaction she sees from the children in the audience

“I can see the joy their eyes,” said the Fishers performer, who will be making her ninth consecutive appearance in the program. “To be an elf onstage and see them giggle … to be in a gown and see that look that kids get in their eye like when they see a Disney princess for the first time … to see and hear their giddiness when the Tap Dancing Santa’s enter the stage … that’s magic.

“To do this show for kids and their families and to see their joy is so very rewarding.”

Opening Dec. 4 and continuing through Dec. 23, “IPL Yuletide Celebration” returns to Hilbert Circle Theatre for the 30th time. Vocalist Sandi Patty is back as host and Pops Conductor Jack Everly leads the ISO. A huge cast of singers and dancers present a program that includes last year’s Disney’s “Frozen” segment, including “Let it Go, “and Yuletide Jukebox, featuring a medley of pop holiday tunes such Paul McCartney’s “Wonderful Christmastime” and Mariah Carey’s “All I Want for Christmas is You.”

Two longtime favorites, the reading of “‘Twas the Night Before Christmas,” and the popular Tap Dancing Santa’s also return.

Despite the repetition of guaranteed favorites in the program, Beck says the show never gets old.

“While certain elements are repeated, the entire show, on the whole, changes so it is easy to keep things fresh,” said Beck, a fulltime professor and instructor at Ball State’s acclaimed theater and dance department. “Being on Broadway and on national tours and doing the same show for years at a time, you learn how to keep things new fresh every night that curtain goes up.

“Then, there are always new cast members each year who help bring the show new excitement.”

In addition to dancing in the show, Beck is co-choreographer, assisting choreographer Jen Ladner with creating the movement. Once the steps are taught, she works with the cast to clean up, tighten, clarify, polish and help make the songs and dances come to life.

Beck is no stranger to the ISO, having been involved with or performed in several Pops concerts. She also has performed in several of its musicals, including “Guys and Dolls” with Hal Linden, “Hello Dolly” with Gary Beach and Sandi Patty and “Hairspray with John Waters and Micky Dolenz.

While spending 14 years in New York City, she performed on Broadway, with national Broadway tours and in regional theaters across the country.

Now living in Indiana, she has appeared on the Booth Tarkington Civic Theatre stage as Mimi in “Rent” and Cassie in “A Chorus Line,” has choreographed several shows for Civic and directed the Carmel theater’s “Cat in the Hat.” She currently is choreographing Civic’s “Mary Poppins” and, as the resident choreographer for the Indianapolis Men’s Choir, working on their holiday show, as well.

Her proudest “production” life, however, is her daughter, Nya, a first grader at Lantern Road Elementary. Nya joins Mom in “Yuletide Celebration,” repeating last year’s role as one of the children in the “‘Twas the Night Before Christmas” scene. She takes dance at the Academy of Dance Arts in Fishers and junior Civic performing arts classes at the Civic Theatre.

“I’m not sure if she will continue in my footsteps, but she definitely loves being in the show with me,” Beck said. “She blows my mind daily on her enthusiasm for life, and I thank her for being my inspiration in everything I do.”

Featuring: Host Sandi Patty and conductor Jack Everly with the Indianapolis Symphony Orchestra and cast of singers and dancers.