You are at:Home»Current in Geist»Local craftsman creates playground ramp 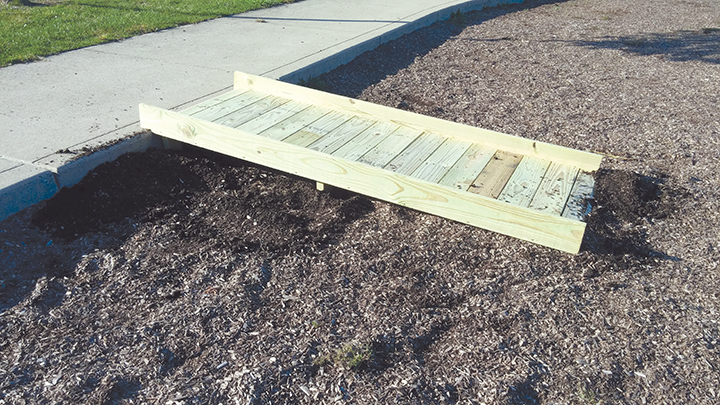 One of the ramps Derringer built for the playground. (Submitted photo)

Mike Derringer works as a home health care nurse, and was visiting McCordsville Elementary School for work a few months ago when he noticed a child in a wheelchair on the playground. The child wasn’t able to play with his friends due to restricted access to a playground area.

“I noticed there was a kid there that was in a wheelchair, and part of the playground at the school was set below the sidewalk. There was about an 8 inch drop. So, he wasn’t able to get to part of the playground,” Derringer said. “He was kind of cut off from where a lot of his friends were playing. He was kind of limited to basically the sidewalk and basketball court area. I noticed there were a couple other playgrounds at the school that were similar where they were sunken down.”

Derringer often does carpentry in his spare time as a hobby, and has built most of the furniture in his own home. He realized he could help.

“It seemed like an easy fix to open the rest of that area for him. I decided to make the ramps so he could have access to the rest of the playground. There were three ramps, and it probably took over the course of a weekend to build them,” he said.

Getting approval from the school was easy and took a short email.

“The day that I was there I sent an email to the principal saying what I wanted to do and she forwarded it on to the superintendent maybe. A couple of hours later she got back to me and said it was approved. It was actually a pretty simple process,” Derringer said.

He has been in touch with the family who is grateful to Derringer for assisting their child. The child can now access all the same areas as his friends.