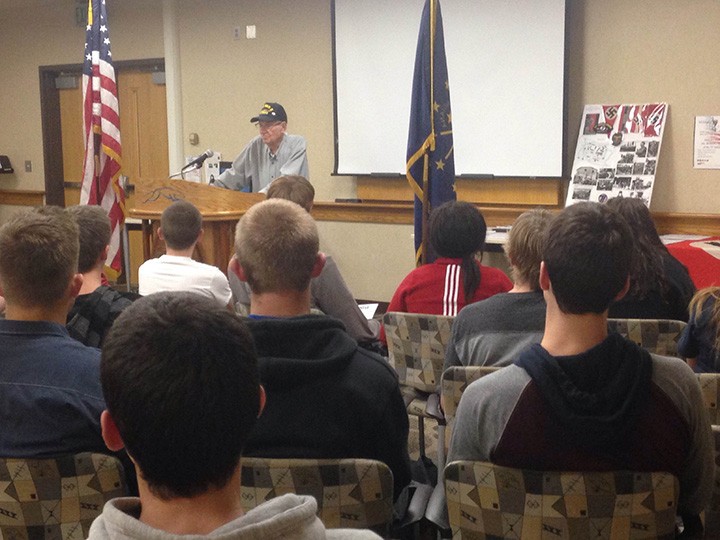 November is a month with holidays that focus on veterans and gratitude. The military club at Carmel High School decided it was the perfect time to thank World War II veteran Robert Swift for his service during a recent convocation.

“He’s a great guy. This is his second year coming to speak to us, and we tie his speech into the freshman’s scheduled Holocaust unit,” military club sponsor Serina Mergulhao said.

Swift, 90, lives in Carmel but was born in Connersville, Ind., and grew up on a farm in Fountain City. He enlisted in the war when he was 18 years old.

The Battle of the Bulge was the major battle that welcomed Swift into the war. He was a medic in the 71st Infantry and was among the first on the scene.

“We captured more prisoners than anyone else,” he said.

He tells stories of entering death camps and saving lives.

“Your job is to round them up and try to save their life,” Swift said, “I was one of the first ones into the death camps.”

Saving lives was a difficult task because of the extreme starvation situations the survivors found themselves in.

“There was nothing we could do. We learned this real quick,” Swift said. “We knew we couldn’t feed them. If we gave them rations they would eat too much and die.”

The unit found that IV’s and soup were the answer to keeping those rescued alive. One story Swift shared was about a prisoner he helped save during the war. The survivor was a keynote speaker during a Holocaust Remembrance Day event at the Carmel Library around five years ago. Swift was able to connect with him and now shares a room with him every year at a World War II veteran reunion in Pennsylvania.

The CHS Military Club started in January 2014. They look forward to honoring veterans every year and are continuing to look for new ways to learn and get involved with military-related activities.

“It’s about education, working for the government, being prepared, and understanding the military isn’t for everyone,” Mergulhao said.