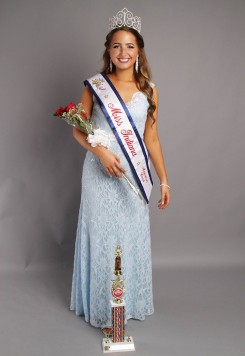 Although Jessica-rose Transfeld often dreamed of being in a Miss America competition as a young girl, her entry into the pageant world was the result of a chance meeting.

“I was at CVS and I commented on her eyelashes, and she said she owned a makeup school and I was interested in makeup with her,” Transfeld said.

That chance encounter was with Brittany Luther, owner of Brittany Renee Makeup Academy in Carmel. Luther told Transfeld she was also a pageant coach and asked if she would be interested in entering a pageant.

“I remember when I was little watching Miss America and telling myself I’m going to do that one day,” said Transfeld, 20.

So Transfeld, a 2014 Carmel High School graduate, entered her first pageant in July in Indianapolis, winning Miss Indiana Coed as part of Miss American Coed pageants. Transfeld is competing in the MAC national competition at the Hilton Walt Disney World Resort in Orlando, Fla., through Nov. 28.

“I got brand new heels for evening wear, so I’ve been walking around the house, vacuuming and doing everything in them,” Transfeld said.

The pageant includes formal wear, interview and talent. Transfeld, a high soprano, will sing “God Help the Outcasts” from “The Hunchback of Notre Dame.” She  made her own dress from torn-up clothes to wear during the competition.

“With all the glitz and glam in the competition, I’m going to wear no makeup and be dressed as poor peasant girl from that time,” said Transfeld, who performed with the Accents, CHS’s female choir.

“When she saw me win, she got interested in pageants,” Transfeld said. “I think it’s great. It definitely helps you grow up as a woman and teaches you skills you are going to use the rest of your life. Her confidence is flying through the roof now. I’ve seen so many women that are shy, introverts, come out and be these beautiful women.”

Transfeld said her father was against her entering pageants when she first started.

“He thought it was just a beauty queen competition,” Transfeld said. “He came to my first pageant and he loved what it stood for. It’s all about poise and service and someone being themselves. It’s about making a difference not only in your community but everywhere you go.”

Transfeld is looking forward to visiting Disney World with the other queens.

Following MAC nationals, Transfeld plans to take a year break to physically and emotionally prepare for applying to the Miss America program.

Transfeld moved to Carmel with her family from Franklin, Tenn., during her sophomore year. She was born in Germany and moved to Tennessee when she was 9 years old. Her father, Christian, is German, and her mother, Lea, was from California.

Transfeld is pursuing a future career in makeup artistry and working as an office administrator in her parents’ business, Carmel-based TELL-C, whose services include roofing and siding.