You are at:Home»Current in Zionsville»Zionsville Plan Commission approves rezoning to make way for new town hall 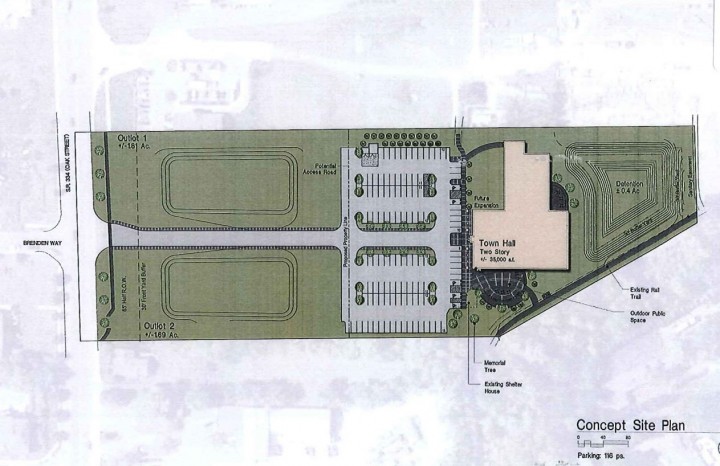 The Zionsville Plan Commission approved the rezoning of nearly seven acres to make way for the construction of a new town hall building behind the existing one.

The commission voted, 4-1, on Nov. 16 to rezone the land from Special Use Development District to a Planned Unit Development District. The new plans call for a retail building or buildings to replace the current town hall, which is in an aging former church building.

Kevin Schiferl was the only commissioner to vote against the rezoning. He expressed concern about the new town hall, a public building, not being easy to see from Oak Street, Zionsville’s major east-west thoroughfare.

“If we’re public, we should make sure the public knows where we’re at and [be]inviting and not hidden behind commercial development,” he said.

The concept site plan shows two retail buildings on the south end of the property along Oak Street split by a future drive that would align with Brendan Way.

“At the end of the day, we will find a signalized intersection at Brendan Way,” said Zionsville Director of Planning and Economic Development Wayne DeLong, adding that the concept site plan is not set in stone.

The Town Council is expected to consider the rezoning at its Dec. 7 meeting.