You are at:Home»Current in Carmel»Carmel Community»Veterans from The Barrington visit D.C. memorials through Indy Honor Flight 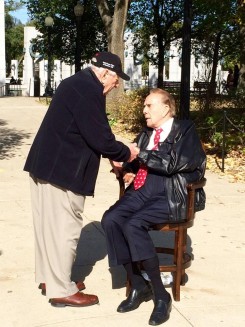 Three residents from The Barrington of Carmel were among a group of veterans to visit Washington, D.C. Oct. 31, courtesy of Indy Honor Flight, a nonprofit that funds trips to the nation’s capital to visit veterans and war memorials.

Ray Casciari, Dominick Paielli and Will Elsner attended a banquet at Plainfield High School the night before heading to the Indianapolis International Airport, where they received a warm welcome from fellow travelers and others.

Casciari, 93, said he was not interested in doing an Honor Flight when he first heard about it, because he had already visited the memorials in 2005. He’s glad he changed his mind.

“I am very glad I went,” said Casciari, who served in the Army during World War II. “The most amazing thing to me was the number of volunteers and the efforts being made. The thing that really got me was the young people. I like to see that response.”

Upon arrival and departure at each airport, as well as at the various memorials, the veterans received applause and thanks. Casciari said he was astonished by the number of young people who wanted to shake his hand and thank him for his service.

While in D.C., the veterans were taken on a guided tour of the city, witnessed the changing of the guard and viewed various memorial sites.

On the return flight home, Indy Honor Flight had gathered letters from friends and family members of the veterans to hand out on the plane. The mail call was an emotional moment for many of the veterans.

“When you’re in the service, you’re away from home and very lonely,” Casciari said. “A letter from home would give you some pleasure.”