You are at:Home»Current in Carmel»Carmel Community»Ham. Co. firefighters in a hot situation for charity 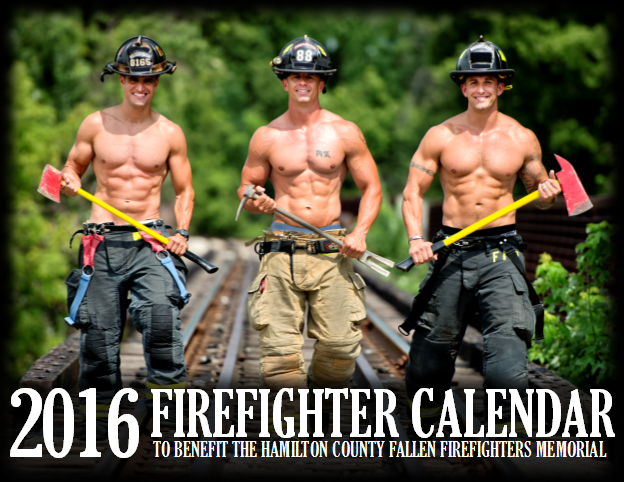 Several Hamilton County firefighters have purposefully put themselves into a hot situation, but not the kind that involves flames or burning.

Twelve specially selected firefighters are featured topless in a 2016 calendar being sold to benefit the Hamilton County Fallen Firefighters Memorial.

“We were looking for a creative way to raise funds, and the Ladies Auxiliary really wanted to move with idea, for obvious reasons,” said Tony Murray, president of the Hamilton County Firefighters Local 4416. “There is a niche here that is somewhat unique.”

It’s been 10 years since a similar calendar was released.

“If we were to do a calendar project every year it would take away from the novelty of it,” said Jessi Emerson, with the Noblesville Ladies Fire Auxiliary. “The combination of a 10 year anniversary and the need to raise funds for the memorial presented a perfect opportunity to do this project.”

Firefighters from Carmel, Fishers, Noblesville and Westfield are featured in the calendar. The calendar committee received names of possible candidates by zone vice presidents, Emerson said. Those who applied then went through an audition process.

“It wasn’t nearly as easy as expected. Firefighters are generally very humble individuals who don’t like to bring attention to themselves,” Emerson said. “It wasn’t difficult to find candidates who were physically appropriate for the calendar. The difficulty was in finding those who were willing to put themselves out there in this way for a good cause. A lot of teasing can happen in a firehouse.”

The photo shoots around Hamilton County created quite the “buzz.”

“Marty Seppala Photography was incredibly professional and talented,” Emerson said. “He also gave the models something to relate to, being an IFD (Indianapolis Fire Department) firefighter.”

The $20 price tag will go toward funding the Fallen Firefighters Memorial, which has been in the works for several years.

“We have reached a point with the creation of the statues to raise the remaining funds – $40,000 – to make the remaining payments,” Murray said. “The memorial project is an important part of our history in Hamilton County in that we will permanently memorialize the three firefighters who made the ultimate sacrifice in service to their community. All three widows still survive, and they deserve to see this memorial completed.”

The memorial is in Noblesville along the White River – almost on the site, Murray said, where Fishers firefighter Bud Moulder made the “ultimate sacrifice” fighting a fire in 1967.

“It is a tradition in the fire and emergency services that we never leave a comrade behind, but when they are called home fulfilling their oath to protect, it is essential that we never forget them or their family’s sacrifice,” Murray said. “In addition, a permanent memorial to the lives lost on 9/11 will be placed at this site. We were able to procure a beam from the World Trade Center that fell after the terror attacks. This will be the only memorial in the county dedicated to those lives lost.”

Calendar Firefighters and years of service

The calendar is available for purchase online at HCFallenFireFightersMemorial.org.