You are at:Home»Current in Zionsville»Back in the day: Hunt club members enjoy the chase 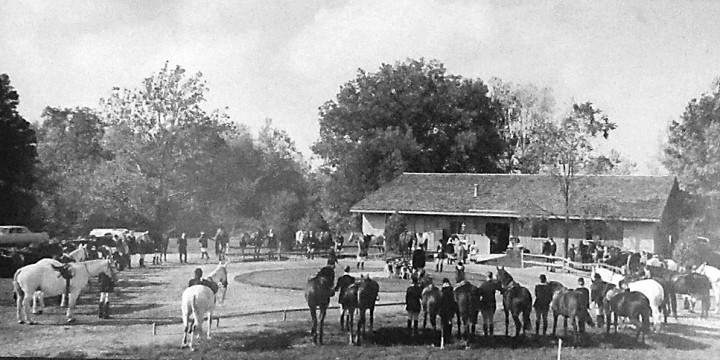 In 1965, the Traders Point Hunt Club celebrated the opening of its new club house. (Submitted photo)

The baying of the hounds, the thundering gallop of the horses, the inevitable shouting of “Talley Ho” – these are the sounds clearly identifying a Traders Point Hunt Club foxhunting event. All that’s missing is the crying lament of the fox, which no longer accompanies the chase. Instead the scent of a fox is laid to mark the trail. Like other North American foxhunting clubs, Zionsville members prefer the chase over the kill.

The first foxhunting activity in America was imported from England by Robert Brooke in 1650, according to to the Masters of Foxhounds Association of America. Early fans of the sport included George Washington and Thomas Jefferson.

Central Indiana enthusiasts, however, waited until 1930 to join in the activity, at least on an organizational level. Local residents Thomas Ruckelshaus and Russel Fortune, Jr. held the first series of horseback jaunts. Those led to the formation of the Traders Point Hunt Club on Nov. 14, 1931.

At the time, riders explored the hills and valleys along Eagle Creek from 56th Street to 96th Street. Urban sprawl, however, broke the open territory into smaller sections. Traders Point remained as home base, but the club sought out other lands in central Indiana for their events. These rolling hills and meadows contain the log jumps and other paneling devices that add extra challenges to the chase.

“The scenery is always beautiful,” according to the club’s website, “company is enjoyable, and watching the hounds as they attempt to find the quarry usually allows for excellent sport and a wonderful day in wide open spaces and fresh air.”

The club’s official hunt season spans from mid-October through February.