You are at:Home»Current in Carmel»Obituary: Irving F. Ball 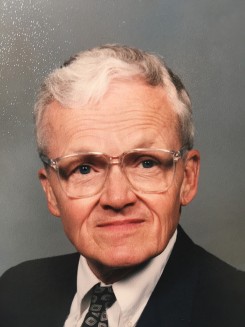 Irving F. Ball died at home Oct. 20 after a long illness. He will be missed by all who knew him.

He was born on Feb. 22, 1928, and grew up in Indianapolis. He earned the rank of Eagle Scout and was a graduate of Shortridge High School in 1946, where he was president of the senior class, an honor student and captain of the football team. He went to Northwestern University on a football scholarship where he graduated in 1951 with a degree in industrial engineering. He was a member of Phi Gamma Delta Fraternity. He later earned an MBA in Mortgage Banking.

He served in the U.S. Navy as ensign and then lieutenant during the Korean War.

Irv was active in his community. He was a member of Service Club, Indianapolis Kiwanis Club, I.A.C., “500” Festival Associate Member and Tabernacle Presbyterian Church.

Irv was a vice president of American Fletcher National Bank and later Bank One where he retired in 1993. In retirement, Irv and his beloved wife Pat enjoyed traveling all over the world.