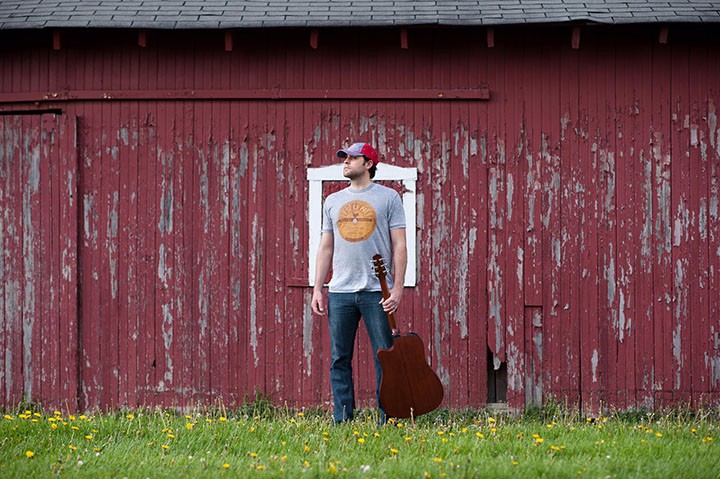 In his new song, “Side Stage,” Zionsville singer-songwriter Brett Wiscons sings about an upstart band whose “gonna prove you all wrong when we get a hit song” as it plays on the smaller, alternate stage at a concert venue.

With a contagious guitar riff, the ‘70’s-style rock tune refers to a place – career-wise and physically — where almost every music act has been, even successful bands like Hootie and the Blowfish, Wiscons’ major influence. It’s a setting where the rookie band is barely audible over the amped-up sound of the headliner on the main stage.

In his mid-30s and with his first child on the way, the genial Wiscons has no illusion of being the next Darius Rucker. But like any creative soul, whether he’s an artist, an author or a musician, he has his aspirations.

Nursing a cup of hot tea at Rosie’s Place on Main Street in Zionsville, Wiscons realistically hopes  to “just get my music on the radio.”

“And I want to get my music and TV and film,” he added. “Those are my goals. I’m getting a little closer. I got my first royalty check last year, something I thought would never happen.”

If a smart radio programmer out there hears Wiscons and vocalist Anne Balbo harmonize on the poignant “Don’t Be the One,” the first single from his new EP, “The Heineken Sessions,” he’d be wise to place it in rotation.

Anxiously awaiting the EP’s release on Nov. 7, Wiscons says its debut single was inspired by turning point in his three-year partnership with his wife Jennifer when he needed to think about what it would be like without her.

I’m gonna love you ‘til my dyin’ day.

Don’t be the one that got away.

A solo version of the song by Wiscons and the single version with Balbo, vocalist for Indy band, Zanna-Doo, are included on the EP. Recorded at Stone Point Studios near Charleston, S.C., the EP was produced and co-written by Mark Bryan, the two-time Grammy-winning producer and founding member of Hootie & the Blowfish. Money raised from Kickstarter, a funding platform in which people can make donations to an artistic project, and Wiscon’s sponsor, Heineken, financed the EP’s recording and marketing.

The most heartfelt cut on the EP is “Until I Think About You,” a song inspired by the unexpected passing of Wiscon’s father, who died of a heart attack at age 64. In the song, Wiscons fondly reminisces about playing baseball, taking late-night drives and watching TV shows with his dad while growing up in Plymouth, Ind.

And I don’t really miss you

Until I think about you.

Then everything that is you

Comes pouring from the corner of my eye.

As difficult as it might be, Wiscons performs the song in his shows.

Returning to the topic “Side Stage,” Wiscons said the song was easy to write “because I’ve done that.”

“There was a time recently when I thought, ‘I’ve been doing this for 15 years and nothing is really happening.’ Then, I started working with Mark and I write these good songs and I get that royalty check, and it gave me a little more hope that something good can happen.”

Gonna prove you all wrong, when we get a hit song. Oooh, a  big hit song.

What: There will be an release party in which The Brett Wiscons Band of guitarists Chad Moore and Tyler Mechem, bassist Joey Shestak and drummer Jason Kuykendall will be joined on stage by former members of Great Scott!, a successful rock group Wiscons formed more than a decade ago.