You are at:Home»Current in Fishers»Fire department veteran of 31 years retires from Fishers role 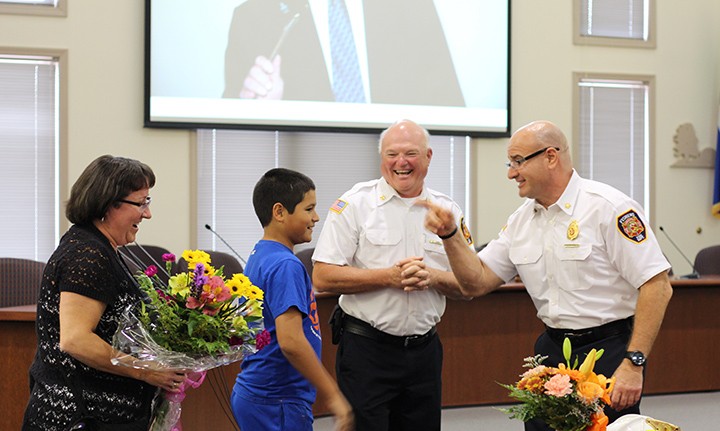 Back when Fishers was a town of only a couple thousand residents, it only had a single volunteer fire station. As it has grown to the city we see today, so has its fire department. One man who helped significantly grow that department was Brian Lott. But after more than 30 years of service to Fishers’ fire department, this month will mark Lott’s retirement from the city.

During his time with the fire department, Lott has served as a volunteer firefighter, fire marshal, deputy chief and chief. As a Fishers native born and raised, Lott had always wanted to be part of the local fire department.

“Ever since I was a small kid; I’d ride my bike over here by the Nickel Plate restaurant and there was a siren on top of the silo nearby and so every time the siren went off I’d ride my bike over and watch the (firefighters) come out,” Lott said. “I always dreamed of doing that so as soon as I was able to, fresh out of high school, I joined the fire department.”

Lott first joined the Fishers volunteer department in 1981. While he was a volunteer he worked for the town of Fishers for a few years before he was hired at the Lawrence Township Fire Department. Once Fishers became a professional department, Lott was one of the first to join.

Lott was first hired on as Fishers’ fire marshal and was quickly promoted through the ranks of the department, but eventually went back to being fire marshal to be out in the field.

“I started out as the fire marshal and in about six months I was promoted to deputy chief until the chief left and then the town council appointed me to chief in 1996. I was the fire chief through 2009.”

Throughout his time in the department, Lott contributed to its fast development growing from one fire station to six.

“It was very fast growth,” Lott said. “I helped build this station. I helped build the township trustees office and station two at 116th and Brooks School. When Chief Kahle left in 1996 and I became the chief we built station 3, station 4, station 5 and probably in my tenure hired 125 firefighters. It was fun, but it was very fast paced.”

Lott had served on many roles in the department but enjoyed being chief the most.

“Probably my favorite role was the fire chief position. I was in that role for almost 14 years and it was during the high-growth period. I was very active.”

During his time as chief, Lott led the department to become one of the first accredited institutions in the state, a title the department still holds today.

As for Lott’s retirement, he still plans to reside in Fishers, but his time working in fire services isn’t over. While he will be leaving his role in Fishers, Lott will go on to become the new fire marshal for the Greenfield fire department.

“An opportunity came up where the Greenfield Fire Chief had asked me if I was interested in the fire marshal position,” Lott said. “They’ve never had a fire marshal before so it’s a brand new position and they’ve been a fire department for a long time. It’s starting a new program for fire prevention. It’s a good challenge and I’m looking forward to a new chapter.”

As for his time in Fishers, Lott is proud to have been a part of helping build the FDFES to the prestigious institution it is today.

“My proudest moment is probably helping lead this department to be the professional department that it is,” Lott said. “We have a lot of great people, very compassionate people that work here, so Fishers is pretty blessed.”