You are at:Home»Current in Carmel»Carmel Community»Carmel man spends more than 3 hours circling roundabout 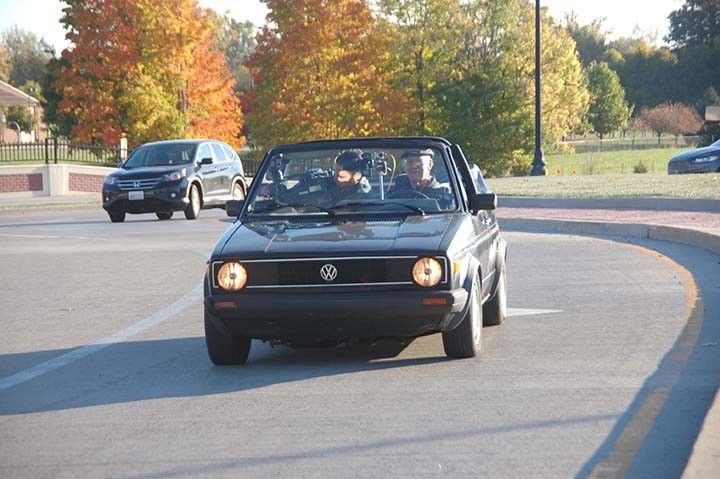 Oran Sands takes a photographer for a ride during his attempt at setting a world record for most time consecutively spent driving in one roundabout. (Submitted photo)

Oran Sands takes a photographer for a ride during his attempt at setting a world record for most time consecutively spent driving in one roundabout. (Submitted photo)

There is no entry for consecutive time spent driving one roundabout in the Guinness Book of World Records.

Carmel resident Oran Sands hopes there will be soon.

On Oct. 13, Sands went around the roundabout at 106th Street and Keystone Avenue for three hours and 21 minutes. He circled the dog bone-style intersection an estimated 350 times in a 1987 Volkswagen Rabbit convertible with a stick shift.

“I kind of did it for a lark,” Sands said. “Eventually I’ll be sending it into Guinness. I always thought it was amusing that you could drive around a roundabout more than once and no one would really know because everyone else in the roundabout had already left. You could do it all day and no one would really know you were doing it all day. So I thought I could do that and see how long I could sit and circle the roundabout before anyone noticed or cared.”

Sanders said he was shooting for four hours.

“We were running into a bit more traffic at the lunch hour,” he said. “I was not as attentive as I would have preferred to have been, so I figured it’s time to pull the plug on it.”

Sands stopped to take on passengers inside the roundabout, including Mayor Jim Brainard, who has been the major proponent of roundabouts in Carmel. Brainard proclaimed Oct. 13 as Roundabout World Record Day in Carmel, which is known as the roundabout capital of the United States. Sands also took a few reporters and photographers on a ride.

Eric Nolting and Keith Cruz joined Sands in the car for the entire ride to ensure he stayed alert, but they didn’t drive.

Sands, 64, works as a software programmer. An avid cyclist, he has previously worked as a surgical photographer and producer for Indiana University Health Methodist Hospital in Indianapolis.