You are at:Home»Current in Westfield»Washington Woods Elementary School to host Premiere Leadership Day 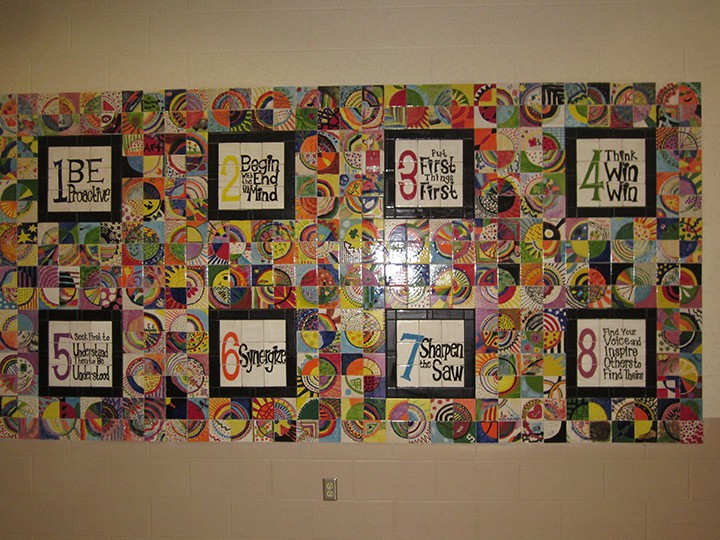 The habits that the school follows are posted around the building. (Submitted photo)

After one of the teachers at Washington Woods Elementary School began working with children and teaching them “The 7 Habits of Highly Effective People,” the school noticed the difference.

The staff noticed that the students started acting differently in the building.

“So one thing led to another, we did some book studies on the seven habits and the staff wanted to jump in and be a leadership school,” Principal Dr. Scott Williams said.

WWES signed a contract with FranklinCovey, after studying the book “the 7 Habits of Highly Effective People” by Stephen Covey. Yet to be considered a leadership school, WWES has to raise $70,000.

After beginning the year with $33 from a bake sale put on by students, the school went on to end the school year in the spring of 2015 with $47,000 from donations alone. The three-year contract goes toward training and support.

“The way to raise money on this is you interest people and get them involved, and then they want to support you,” Williams said. “That’s what we’re trying to do because when they stop and listen to it, they’re interested in what we’re doing and want to get involved.”

In regards of being a leadership school, WWES will host a Premiere Leadership Day Nov. 5 at the school. The keynote speaker will be Muriel Summers, a teacher who originally worked with Covey on incorporating the seven habits to be used in an elementary classroom.

The presentation will be on what it means to be a leadership school and how the students learn and act on the seven habits. To demonstrate their leadership, students will be helping at the event.

The cost to attend is $35, and the registration deadline is Oct. 26.

“It shows all the different ways to use children in the building for leadership and helps prepare children to become leaders and look for current ways to use them as leaders,” Williams said. “This day puts an emphasis on that for us.”

The registration fees for the Premiere Leadership Day go to the school to help support their fundraising goal for the second year of the contract.